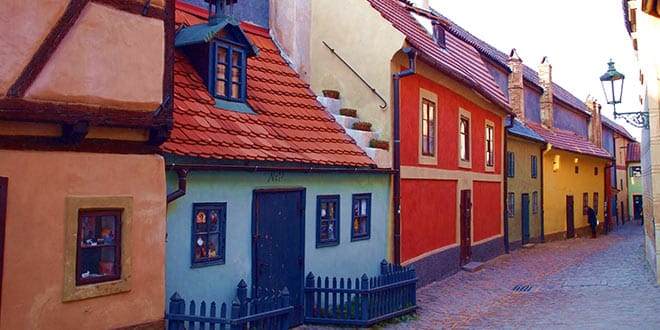 After the repairs, which cost 39 million Czech crowns, Prague Castle’s Golden Lane is open again from July 2011. The first change, though an expected one, is the addition of very bright colours.
The restoration specialists used the colours designed in the 1950s by the designer Jiří Trnka. The once-grey houses with more than five centuries of history now shine with twelve different colours.
The interiors of the houses changed too. Nine of the souvenir shops were replaced with historical museums. It was not expensive. Prague Castle paid over two million crowns. This is thanks to people like Ms Miloslava Šedivá, who donated the goldsmith workshop equipment inherited from her deceased father.

Unless you go into one of the seven commercial shops, you will experience the world of the former inhabitants. In the seven houses, there are exhibitions about the people who once lived there. Visitors can visit the clairvoyant Matylda Průšová, who was nicknamed Madame de Thébes, and you can visit workshops and homes of a seamstress, a herbalist, a red shooter, a period pub or a unique Kazda’s house, full of covers from old films with some period cinema. 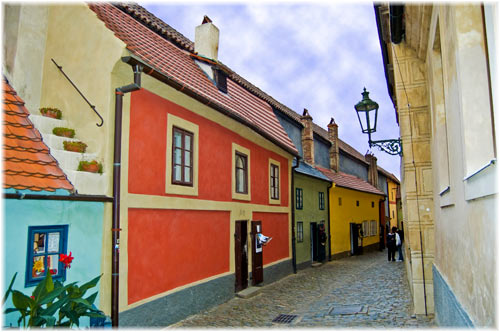 According to the person who once lived there, each exhibition has been tweaked down to the last detail according to the profession the person did and what fate they had. “We thought about the Golden Lane and its exhibitions the whole year. I asked for help from the Prague Castle staff; everybody I know, and myself brought some things from a waste dump. It was as if the whole nation volunteered to contribute. In my office suddenly lots of items started to pile up, pieces of furniture and cutlery people brought to me, sent to me or even transported here from the whole republic,” says the author of the exhibition František Kadlec, a historian and director of tourism at Prague Castle.

“A significant portion of the exhibitions was made in the Barrandov Film Studios or from the deposits of the Prague Castle or other Czech museums. But we still had to buy some things at various second-hand shops and antique shops. But there is one donation which truly saved us because equipment for a goldsmith shop is impossible to find, and even if so, the price would be very high.” Kadlec thus highlights the most important donor for the exhibition.

The goldsmiths is a flagship of the Golden Lane, but its equipment worried the creators of the exhibition the most because, in the Czech Republic, there is probably only a handful of people who could own such equipment.

Thanks to a coincidence, the equipment for the most precious exhibition was provided by Miloslava Šedivá from Náchod. “My son heard on TV they were going to make an exhibition in Golden Lane, so he asked me if we should not donate them what we had left after our grandfather. I would not know how to arrange that, but my son wrote to the Prague Castle offices. As soon as they got the letter, they arrived at us in Náchod immediately,” says Ms Šedivá.

Thanks to the gifts from common people, for whom the Golden Lane is a symbol of the golden age of the country, it was possible to create the interiors, which really reflect the atmosphere of the old times, when the original inhabitants lived there.

“Reconstruction of the houses and the whole lane was successful, but I have to admit the revitalisation of the interiors was even better than we expected. Except for the visuals, the visitors will get also smells and audio experience to bring out the feeling of the old times,” says the master builder, Zdeněk Procházka.