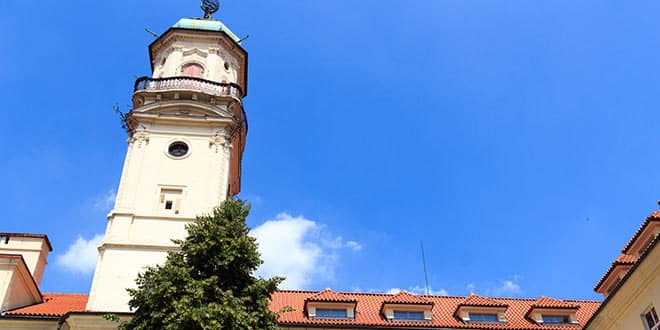 The magnificent tower of the Klementinum (a vast complex of beautiful baroque and rococo halls now occupied by the Czech National Library) may seem something of a curiosity. Still, it continues to play an important role in scientific research to this day. 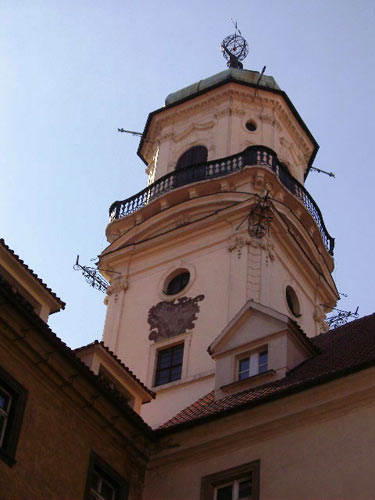 The tower was constructed around 1723 on the orders of the chancellor František Retz, probably under the supervision of František Maximilían Kanka or possibly Kilián Ignác Dientzenhofer, or maybe even Anselmo Lurago. The statue of Atlas that adorns the very pinnacle of the tower’s cupola contains a tin plaque commemorating Chancellor Franta’s contribution, but nothing to indicate the architect in charge. In 1748, the renowned mathematician Josef Stepling (1716-78) was appointed Professor of Geometry and immediately installed state-of-the-art astronomical equipment produced by Jan Klein (1684-1762), the Professor of Mechanics. A 1780 statue of Cupid commemorates Professor Jo by Ignác Platzner outside. The observatory became one of the finest scientific research institutes in the world and continued its work long after the Jesuits were expelled in 1773. One of Professor Jo’s leading students, Antonín Strnad (1746-99), was appointed an observatory adjunct in 1774 and commenced a series of systematic observations of the Czech climate that continue to this day and are now used as the benchmark for Central European climatologic research. Other famous tower inhabitants include František Josef Gerstner (1753-1833), who designed a horse-drawn railway from Budejovice to Linz, Ladislaus Weinek (1848-1913), who published the first atlas of the moon and František Nušl (1867-1951), who co-invented the apparently invaluable circumzenithal. The tower was also home to a very accurate sundial, which still works, and later, an even more accurate pendulum clock, which now stands idly in the entrance hall. From 1842, a man waving a flag from the top of the tower signalled noon, and from 1891, this was augmented by a cannon volley fired from Petrin Hill at the sight of the flag. Even Czech national radio took its precise time signalling from the tower. This all came to an end in 1928, when the astronomical observations were moved to the new Ondrejov Observatory and all scientific research, except meteorological recording, came to an end in 1939. In 2000, the observatory was cleared of rats, pigeons, KGB, and other vermin and disclosed to the public 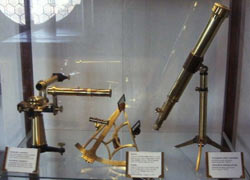 As you climb the ancient wooden stairs from the Baroque Library, the first room you come to is filled with glass cabinets displaying old scientific equipment. The Meridian Room is home to the Prague Meridian, the curious sundial, and other pieces of restored and reconstructed scientific equipment, including an ingenious set of steps that convert into a viewing seat. However, the true highlight of the tour is the balconied roof, where you find yourself high up among the spires with unparalleled views across the city.

The tour of the Klementinum Tower and the Baroque Library runs every hour on the hour; it lasts about an hour and costs 100 CZK.