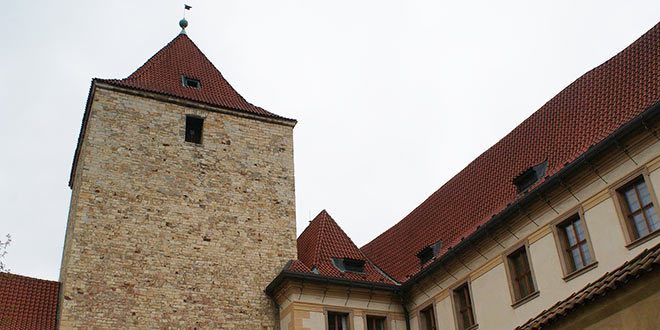 The Black Tower is one of the oldest existing buildings in Prague. It was built in 1135 as an eastern gate of the Romanesque fortification of Prague Castle. You can still see the former gateway on the ground floor, but it is walled up now.

Origin of the name “Black Tower”

The Black Tower belongs to the area of the Supreme Burgrave’s House at Prague Castle. Its name “Black” originates from the time of the big fire of Prague Castle in 1541 – its walls remained black for a long time.

However, the tower was called “Golden” in the era of Emperor Charles IV in the 14th century because of its roof, which was covered with gilded plates of lead.

Prison in the Black Tower

The Black Tower was mainly used as a prison, as were most of the towers at Prague Castle. Many of the inscriptions written by prisoners can still be seen on the tower walls, most of which are from the 16th century. The upper rooms of the tower were mainly occupied by debtors, who were considered to be “better prisoners” than others and even had some privileges. For example, people could visit them, bringing some things of their own into the prison. On the other hand, they had to find a way to obtain some food, and if they were not able to do so, the creditor had to nourish them. When a debtor died of hunger, his creditor had to starve as punishment.

During the Revolution in 1848, the artillery of the Habsburg monarchy cannonaded Prague from a place by the Black Tower.

At present, the Black Tower looks almost the same as it did after some modifications in 1538. The depository of archaeological discoveries of Prague Castle is kept there. 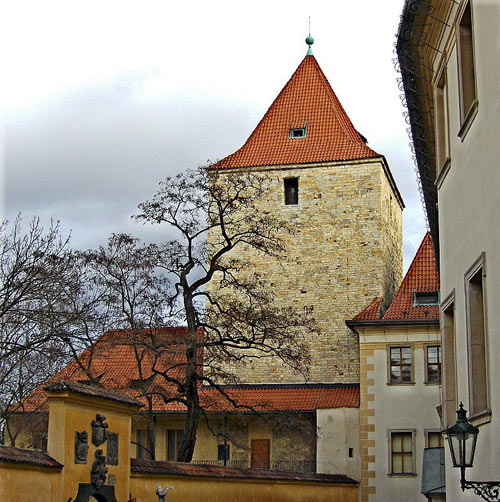