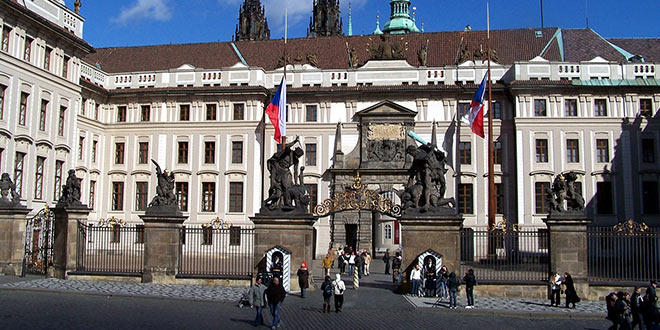 When visiting Prague Castle, you should definitely see the view from the ramp at Castle Square. It is one of the best lookout places in Prague. Castle Square is the large area in front of the entrance gate to Prague Castle. There are several important palaces of various architectural styles there. The Square has maintained its layout since the Middle Ages.

There is a Marian Column in the middle of Castle Square. F. M. Brokoff made it in 1726 and allegedly expressed the intercession of the Castle District citizens for a son and heir of Emperor Charles VI. You can also see the statue of the first Czechoslovakian president, T. G. Masaryk, in Castle Square.

The Archbishop’s Palace in the square is one of the most ostentatiously decorated palaces in the Castle District. It has been the seat of Prague’s archbishops since the 16th century. The Sternberg Palace (No.57/15), standing next to it, belongs to the National Gallery in Prague and old European art is exhibited there. On the opposite side of Castle Square stands the Schwarzenberg Palace (No.185/2), a typical Renaissance building decorated with sgraffito. It is one of the largest buildings in the Castle District. Originally an aristocratic residence constructed in 1563, it is being modified for the National Gallery in Prague. The Empire Salm Palace (No.186/1) stands next to it.

The Church of Saint Benedict, situated to the right of the Schwarzenberg Palace, belongs to the Carmelite Convent. The City Hall Staircase next to the church leads from Castle Square to Nerudova Street. A gateway between the Lesser Town and the Castle District used to stand there in the past. Another staircase, leading from the Square to the Lesser Town, starts at the lookout ramp. It is called the New Castle Staircase, as opposed to the Old Castle Staircase, which is at the eastern end of Prague Castle.

Martinic Palace and other impressive buildings

Another impressive palace in Castle Square is the Martinic Palace. It was built in Renaissance style in the 16th century for the imperial vice-regent Borita of Martinic. It is a sort of replica of the Old Royal Palace at Prague Castle – the Banqueting Hall imitates the Vladislav Hall. It was probably intended as a glorification of the vice-regent.

The Canon’s Residence (No.65/6) is where St. John of Nepomuk reportedly used to live. The Tuscany Palace (No.182/5) closes the Castle Square, standing opposite the Prague Castle. It was built in Baroque style by J. B. Mathey between 1689 and 1691, and statues by Jan Brokoff decorate it. The Tuscan dukes possessed the palace for two centuries, from 1718.

Located at ground level in the northern wing of the Castle, this area was recently opened to the public and contained an exhibition hall. 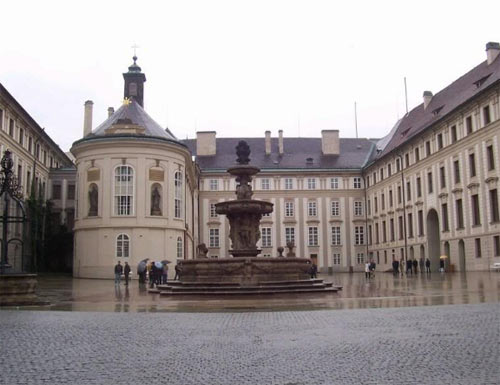