Dating from 1478, this is Europe’s second oldest ‘surviving’ Jewish cemetery. Some 12,000 tombstones are located here, each crammed into a tiny space, with the oldest dating back to 1439. Indeed, because it was forbidden to enlarge the burial ground beyond the walled ghetto, the Jews were forced to bury their dead on top of each other – meaning that an estimated 100,000 bodies in about 12,000 graves lie here. Among the cemetery’s distinguished stones are those of Rabbi Avigdor Kara, Mordecai Maisel, Rabbi Löw (his real name being Jehuda ben Bezalel, the creator of the Golem) and David Oppenheimer. The cemetery was closed in 1787.

The Old Jewish Cemetery can be visited from Sun-Fri. The graveyard is an eerie plot of land, piled with gravestones in all manners of positions. Dating back to the 15th century the cemetery was in use until the 18th century. However, the present day cemetery, consisting of thousands of bodies …

END_OF_DOCUMENT_TOKEN_TO_BE_REPLACED 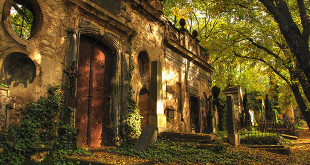 The cemeteries, including a Jewish and a Russian cemetery and one from 1679 for plague victims, contain tombs of Franz Kafka and painter Josef Mánes in well-tended graves in the eastern part of the Olšany Cemeteries. Location: Vinohradská 153, Jana Želivského. Open daily. In Czech: Olšanské hřbitovy