The Royal Route is a great walk through Prague’s historical core up to the castle. Along the way you can admire Gothic, Renaissance, Baroque, Classicist, Art Nouveau and Cubist architect buildings and see the best of what Prague can offer.

This walk follows the processional route taken by the kings and queens of Bohemia at their coronation, starting with George of Poděbrady in 1458. Carriages would travel down Celetná, through Old Town Square and along Karlova, before heading across Charles Bridge, then along Mosteká into Lesser Quarter Square before making their way via Nerudova to St. Vitus Cathedral in the castle compound where the new monarch would be crowned. The Royal Route used to link the gates of Old Prague, the Jewish Town, Lesser Quarter and Prague Castle.

This historical walk cannot be missed by anyone walking in the old centre of Prague, as it has been marked with a silvery plate, which can be still seen on the side-walk and which bears the inscription ‘Silver Line’. The Silver Line starts at Powder Tower just in front of Municipal House and goes all the way through Celetna Street down to Old Town Square.

Municipal House, a beautiful Art Nouveau house or Náměstí Republiky (Republic Square), is the Royal Route’s starting point. Stroll through Powder Gate and then down Celetná Street. Celetná is one of the oldest streets in Prague with beautiful historical houses decorated with breathtaking murals, house symbols and facades. Interesting facades to admire are At the Three Kings, At the White Lion, At the Black Sun, House of the Black Madonna and At the Vulture; then swing north up to Králodvorská, past the Hotel Paříž to the Kotva shopping mall. Turn left into Jakubská and walk down to St. James Church, then cross Malá Štupartská and stroll through Týn Court. Exit at the western end and go past the northern door of Týn Church into Old Town Square. Veer southwest to emerge into Malé Náměstí. Bear left, then right into Karlova. Karlova is a quaint, twisting street lined with galleries and souvenir shops. Follow Karlova to Charles Bridge. Before crossing Charles Bridge stop at Klementinum. Get through the tourist crowds and cross the Vltava river to Mostecká into the bustle of Lesser Town Square to see the Baroque St. Nicholas Church. Cross to the square’s northern side and turn left into Nerudova. There is quite a steep climb to the hill which leads to Prague Castle.

The Route For The Royal Coronation 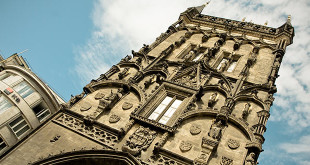 No stay in Prague is satisfactory without a walk down the cobbled streets of its’ historical centre up to Charles Bridge and the castle. This route emulates the processional path that the queens and kings of Bohemia took at their coronations, beginning in 1458 with George of Poděbrady. Their carriage …

END_OF_DOCUMENT_TOKEN_TO_BE_REPLACED 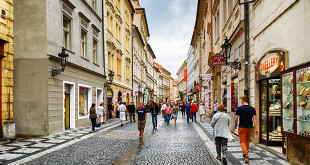 Named after the plaited bread rolls first baked here in The Middle Ages. Today Celetna Street is a pedestrian’s lane from the Old Town square to the Powder Tower (part of the Royal Route walk). The Royal Route was a route through the city which Czech kings had to follow …

END_OF_DOCUMENT_TOKEN_TO_BE_REPLACED

November 26, 2015 Attractions/What to See, Celetna Street, The House of the Black Madonna, The Royal Route 0 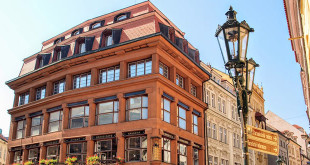 This building at Celetná no. 34 was designed by Josef Gočár between 1911 and 1912 as a multifunctional building with shops on the ground floor and offices, flats and the legendary Orient coffee house with its cubist furniture on the floors above. It is a real architectural masterpiece with huge …

END_OF_DOCUMENT_TOKEN_TO_BE_REPLACED 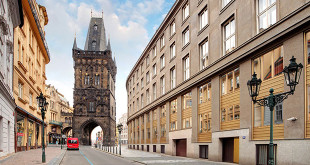 This frequently repaired Gothic Gate (Powder Tower) reminds us of the time when the Royal Court Palace used to stand here and the gate formed an entrance into Old Town. Powder Tower is one of the 13 original fortified gates to Old Town and today stands isolated next to the …

END_OF_DOCUMENT_TOKEN_TO_BE_REPLACED

House At the Golden Angel 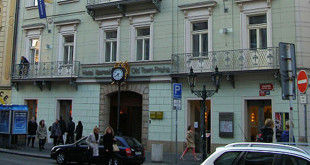 The house “At the Golden Angel” in Celetna Street (No.29/588) near the Old Town Square has a colourful history. There used to be a popular coaching-inn and, later, a luxury hotel for the richest Prague visitors. Many famous personalities, such as Wolfgang Amadeus Mozart, stayed in this house.   Knights …

END_OF_DOCUMENT_TOKEN_TO_BE_REPLACED 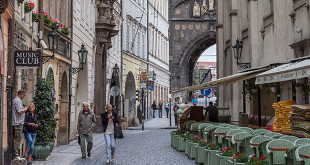 Originally called Jesuits street in the 12th century this narrow medieval street was part of the Royal Route, and has always connected the Old Town by way of Charles Bridge with the Old Town Square. There are several original Gothic and Renaissance houses, such as the Colloredo-Mansfeld Palace, At the …