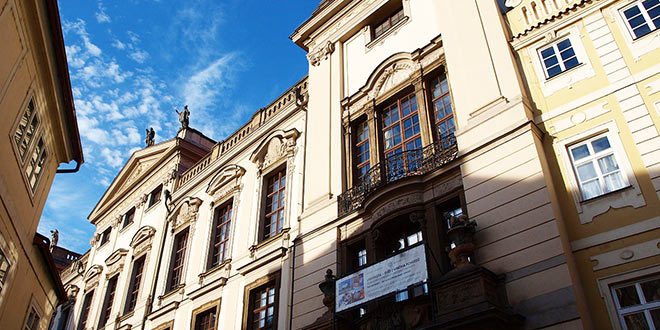 Named after the wealthy patron of the arts, Vaclav Gallas, this outstanding Baroque palace was built by Johann Bernhard Fischer of Erlach (between 1713 – 1719). There are statues made by Matthias Bernhard Braun and a theatre where Beethoven performed some of his works. The palace has been restored and today it houses the Municipal Archives of Prague.

The enormous Clam-Gallas Palace in Husova (Jan Hus) Street in the Old Town straddles the crossroads of vital medieval communication, also known as the King’s Road, which connected the Castle with the centre of the Old Town, and an ancient highway leading to Vysehrad. The location’s significance is corroborated by the presence of a Romanesque homestead whose remnants, an ashlar masonry wall, have been preserved in the cellar of the current palace. The homestead included a church, later rebuilt in Gothic style, of the Holy Virgin at the Pond, whose spire, until 1791, used to be the dominant feature of the north end of today’s Husova Street where the current Marianske (Saint Mary) Square now lies. 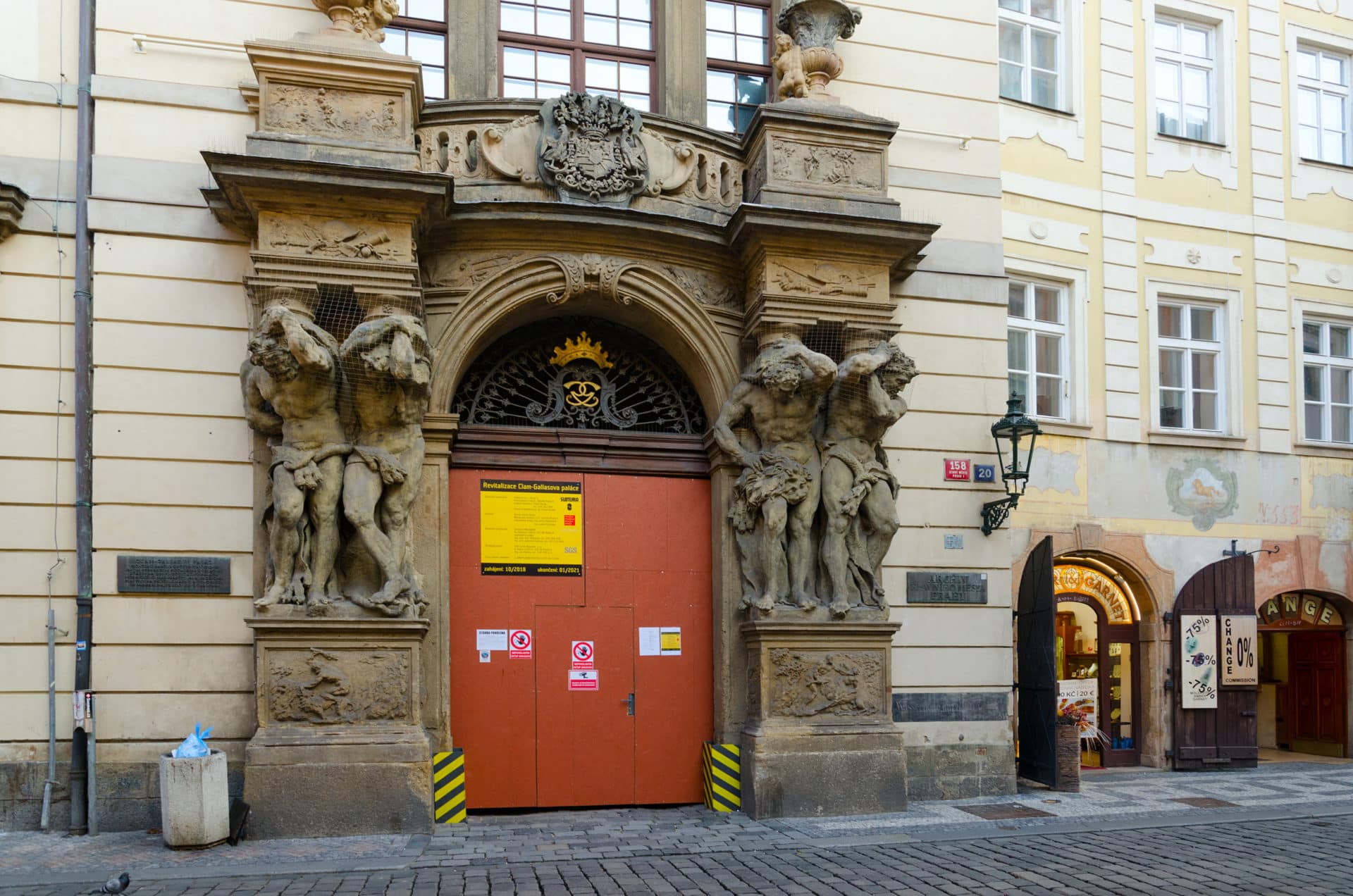 It appears that in the third quarter of the 1300s the homestead, owned at that time by an important member of the ruling House of Luxembourg, Emperor Charles IV’s brother John Henry, margrave of Moravia, was rebuilt into a sprawling two-story palace with a mighty tower. The property was successively held in the 15th and 16th century by solely burgher owners. After one of them, Jiri Samuel of Hradek, it was also called the Samuelovsky house. In the early 17th century it was purchased by the Kinsky family. The last owner in this line, Vilem Kinsky, a friend and close collaborator of Imperial generalissimo Albrecht of Wallenstein was murdered together with him in 1634 in Cheb (Eger). Afterwards, the confiscated property was awarded to Mathias Gallas de Campo and of Freinthurn, one of the organizers of the Wallenstein murder.

The palace’s history was most expressively influenced by his grandson Johann Wenzel Gallas. This important diplomat who served as imperial ambassador to England, the Hague, the Papal Curia, and, shortly before his death in 1719, as the viceroy in Naples, loved to come back to Prague from his frequent travels and paid appropriate attention to his palace. In 1699 he began buying the neighbouring houses with the intention of future enlargement of the palace, whose renovation, entrusted to architect Marco Antonio Carnevale, was commenced just then. The renovation completed in 1700 did not satisfy the cultural demands and refined taste of this leading Austrian aristocrat who in his youth obtained excellent education and on his travels visited the most acclaimed seats of European nobility. In 1713, he invited to Prague a Viennese architect, Johann Bernard Fischer of Erlach, whose construction plans were put to use the same year. The contract for sculptural decoration of the palace, primarily its portal, staircase and Neptune’s fountain, went to the works of Mathias Bernard Braun.

The bulk of construction works on the large palace compound was completed in the year of Johann Wenzel Gallas’ death. Despite considerable financial difficulties brought about the completion of an undertaking of such monumental proportions, son Philip Joseph concluded an agreement with Carlo Carlone, an Italian painter of renown, who was hired to execute painting embellishment of the palace. Between 1727 and 1729 he produced the main staircase frescoes, of which the largest one, above the main landing, depicts the triumph of the god Helios, and further the frescoes in both ceremonial halls on the second floor that represent an assembly of the Olympian gods, and an apotheosis of Art, respectively. Frescoes were painted also in the smaller rooms and the east-wing palace library. Approximately at the same time, the staircase and the large white hall, also known as Marble Hall, on the second floor, was adorned with stucco. Mostly inspired by Greek and Roman mythology, the decoration is of exceptional artistic quality but it was never completed in its entirety as originally envisioned by Fischer.

With Philip Joseph’s death in 1757, the Gallas family died out on the spear side, and the palace was inherited by Gallas’ sister Elisabeth’s son Christian Philip von Clam. He united both family names as Clam-Gallas, giving the palace its final name. Sometimes around 1800, a small corner garden was established in the place where the former church of the Holy Virgin at the Pond used to stand. An Empire-style sculpture by Vaclav Prachner, an allegory of the Vltava River, portrayed as a maiden and lovingly nicknamed Little Therese by the public, was set in a niche in its wall. At that time the palace was a hub of science and the arts. Another floor was added to its north wing where a theatre was to be built. At the end of the day, this positively lofty intention did not materialize and the available attic space was subsequently used as a hayloft.

In the 19th century, the palace was in part converted to an apartment building, and after the founding of the First Republic when the family got into financial troubles, the ceremonial wing of the palace accommodated Ministry of Finance offices, a wedding chapel, and exhibition premises. The palace was confiscated in 1945 pursuant to the Benes Decrees, and the Prague City Archives was moved there having lost its original premises in the Old Town Hall blaze. The palace whose dilapidation had begun already in the period between the two world wars was eventually in such a state of disrepair that necessitated total renovation efforts after 1978. These were completed in 1994, including restoration work on the paintings and sculptures. Today, the Clam-Gallas Palace, a splendid example of a monumental late Baroque aristocratic seat, set smack in the middle of medieval-type townhouses, shines in its erstwhile grandeur again. Owned by the Capital of Prague, it now serves as the second site of the Prague City Archives. Its ceremonial halls now hold exhibitions, concerts, scholarly conferences and other social events. 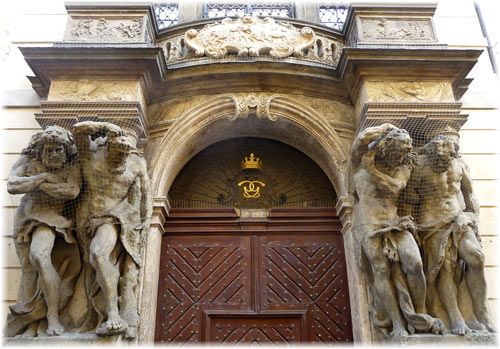