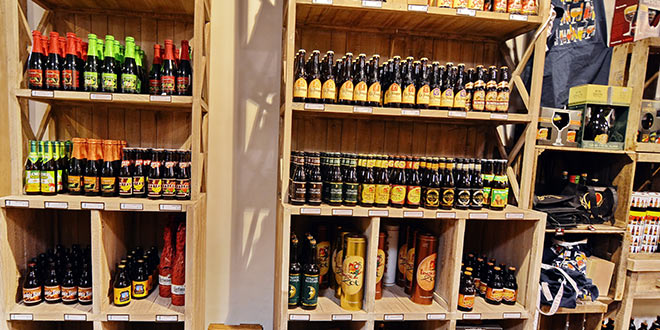 The terms listed below comprise the foundation upon which many modern-day Czech beer types are based: 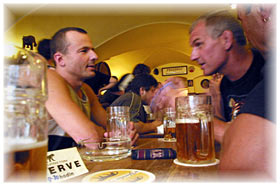 The term ‘Tap’ is a legal definition for beers brewed between eight degrees and ten degrees on Balling’s scale, although it can also relate to bottles. This is the Czech Rep’s most commonly seen type.

Broadly speaking, světlé výčepní beer’s a style of Pilsner brew, coloured light gold, normally made with quite a low alcohol level because of the smaller quantity of malt at eight to ten degrees Balling. The equivalent in Germany is called Schankbier. It’s often 3.5 to 4 percent alcohol, usually with far less malt and far less bitterness and hops aromas than the premier světlý ležák. Should these beers follow this style too much, then they aren’t in the authentic Czech style any more, resembling something more similar to a brew from Germany alternatively.

Dark tap beers are small-gravity, reduced-alcohol (approximately 3.5 to 4 percent) dark brews, similar to a German Dunkles Schaпkbier. They have a slimmer body, usually with far less cola and coffee flavouring than the premier tmаvý ležák. They are malty, sugary with hardly any bitterness and frequently overlooked in their ability to combine well with meals.

Unhelpfully, ‘lager’ is the legal classification for all beers brewed from n degrees to 12.99 degrees on Balling’s scale, regardless of which techniques are used to brew them. These beers are regarded as the flag-bearers of all breweries.

Light lager is a classification that encompasses both Budvar and Pilsner Urquell. A transparent, rich golden colour and a distinctive malt body with the powerful, citrus smell of Czech hops along with a bitter-sweet after-taste. Unlike conventional wisdom, the top instances of it here aren’t extremely fizzy and actually quite flat. In general, 4.4 to 5.2 percent of alcohol by volume is presently regarded as the premier or flag-ship brew for all breweries.

Roughly five percent of Czech beer – and its’ quickest growing export area – is dark lager. This refers to beer made with identical yeast and a similar technique to Pilsner style beer, but with a segment of caramel or dark malt and a far reduced presence of hops. Influenced by German Schwarzbier and Dunkles, and sometimes named čerпý (black), though this isn’t an official name. Roughly about five percent alcohol, black or dark amber in colour with a sandy head or tan and greater sweetness in taste. It’s often drunk with cola, rich coffee, ginger notes and chocolate and has a much less bitter taste than many gold lagers in the country.

The term ‘Special’ refers to every beer brewed over thirteen degrees on Balling’s scale.

Czech law states that a `special’ relates to all beers with over 130 Balling as original gravity, although that can refer to light or dark, opaque or clear and all other combinations of this. Generally, the majority are powerful lagers similar to the ram (Bock) Doppelbock from Germany. Some makers here even utilize the Czech equivalent word of ‘kozel’ (goat), ‘began (ram) or the more compact ‘kozlík’ (kid). Often, these span from 5.5 to 9 percent alcohol or more. The hops aroma is small to non-existent. The flavour of the hops is also less pronounced, particularly in the darker versions.

There’s not just a sole style but, actually, an entire range of styles that weren’t here even only a decade ago. Before the newer Pilsner brand burning throughout the country during the mid-nineteenth century, many top Czech brews were ales. Once the Velvet Revolution came, all of these had long disappeared and became old history, not remembered by anyone.

Following the start of the 21st century, early re-emergence featured the Belgian influenced ale from the brewery in the Želiv monastery, along with the surprising Kölsch and Altbier at Prague’s Richter Brewery. I.P.A.’s, and different international styles of ale, by 2006 had started to feature at brew-pubs on each corner of the Czech Rep, eventually showing up on the great English Pale Ale bottle from Primátor.

Broadly speaking, eucalyptus beer, sour cherry beer, stinging nettle beer etc. are made from a common tmavý ležák or světlý with a dash of syrup added following the lagering. Sometimes, the right balance is achieved, but they sometimes become too sweet and irritatingly chemical in their texture.

Yeast beer (or Kvasnicové pivo) is a solid Pilsner style of lager containing a dosage of `young’ beer – fresh wort and yeast – following the lagering re-igniting the process of fermentation. While this is normally cloudy, it often can be obvious (and although many are lighter in colour, darker or partially dark yeast beer sometimes appears). It’s comparable with Hefeweizen as a `living’ beer, and it’s almost solely found in taps and not in a bottle, either in brew public houses or in brewery tap-rooms. Sometimes located as Krdusen in Germany, it’s much more frequently seen in the Czech Rep. Yeast beers have similar basic flavours to light tap beers (svělté výčepní), with an extra bread style nasal scent of yeast and a refreshing oral tartness.

A darker, Baltic style of beer, normally bottom-fermented and needing a brewing temperature over eighteen degrees Balling. For many years, the sole remaining porter of the Baltic style’s been the Pardubický Porter, which is brewed at nineteen degrees and finishes with a solid eight percent alcohol. It’s extremely dark brown as a lager, with a sweet taste of roast malt, sweet and sour and a hint of pepper notes, slight carbonation, along with a molasses style finish of great depth with a bit of hop bitterness. This style definitely merits a comeback.

This has similarities to yeast beer, but it is technically not identical to it, although the terms are frequently confused. This beer is simply beer that’s not filtered instead of beer that fresh yeast’s been added to. It can be gold, dark or half dark, sweet or bitter or high or low alcohol. This is frequently an accurate indication of quality, traditional lager from Czech.

In an uncharacteristically heroic manoeuvre, Staropramen revived this centuries-old Czech style of beer in 1999, virtually single-handed, using a Millennium beer. It subsequently has been adopted by other breweries, normally called garnet (granát) amber (jantar). Whilst lots of people think of these as řezапé (half darks), they aren’t actually identical: řezané’s a mixture of separate brewed dark and light lagers, whilst polotmavé’s a solitary beer that’s brewed to a half dark, red colour.

Dissimilar to Pilsner style brews, which normally need very soft water, half dark beers can be produced with higher carbonate levels and contain dark malt and caramel to varying degrees, along with Pilsner malt. Exceptionally clear and red/amber in colour, they’re possibly nearest to the lagers from Vienna introduced by Anton Dreher in the nineteenth century: 4.5 to 5.5 percent alcohol, a slightly toasted texture and some substantial malt complexity along with a balanced hop after-taste. A big-gravity variation, polotmavé speciál is the equivalent to the Märzen from Germany.

While this term is utilized for all types of beers around the globe, in the Czech Rep, there’s only 1, Pilsner Urquell, ensuring it has somewhat of its’ very own style. Characterized by rich gold and amber colours and a deep, malt, sugary body, Urquell’s got a pronounced hoppy bitterness derived from a substantial dosage of hops taken from ‘2аtеc’, also called Saaz (which is its’ German name). Urquell is the original and so remains the benchmark against which most Czech beers are judged today. However, it’s losing its’ appeal in this respect (lots of breweries now talk of attempting to equal the Pilsner Urquell of two decades ago). It’s got a modest quantity of alcohol, only 4.4 percent, instead of the five percent of many similar beers from Europe. The sugars that remain add to the richness of the body, distinguishing the Czech beer from its’ lower quality competitors overseas.

This isn’t as much a style as it is a cocktail of beer: a mixture of “tmavé pivo” and “světlé” from identical categories (like Iežák, výčepní). This is carried out in breweries and then kegged and bottled for distributing, although the barman most often does it at the tap. It’s not identical to polotmavé, but many people confuse it for this.

`Light’ beers are brewed at temperatures up to 7.99 degrees Balling and have fewer than one hundred and thirty K.J. For every one hundred ml. They are extremely rare.

Wheat beer used to be named white beer and is representative of the wit of the Belgians. Before the Pilsner style was invented in 1842, the Czech Rep was renown for this beer style. These days, just a small number of bottlers (Primátor and Herold most notably) market pšeničné pivo. However, the style is definitely increasing in popular appeal and is becoming more frequently found in brewpubs. Clove, banana and Vanilla notes are regularly present in its’ smell. Wheat has to comprise at least thirty-three percent of the grist, producing a body that is light and which has a very understated flavour of hops. However, a yeasty, crisp tartness is present a lot in this beer that basically has a 4.3 to 5.6 percentage of alcohol. This beer is among the few beers from the Czech Rep consistently made with top-fermenting yeast.

Ordering a Beer in a Czech Pub