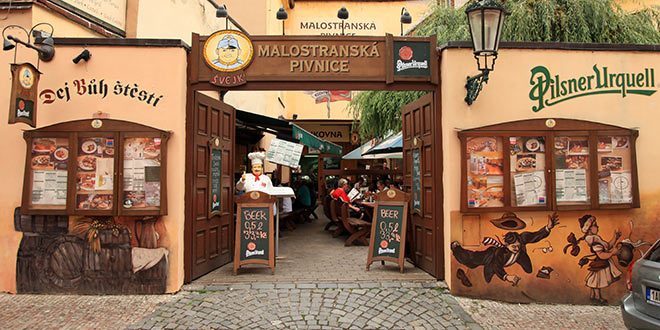 Bohemian Beer dates back to the Medieval era and functions more as a social lubricant for the Czechs than a beer. The pubs in Prague, which are omniscient, smoke-filled and down-to-earth, have straightened up a little recently but are still packed with locals and are affordable.

The traditional Prague pubs are a great place to savour a wholesome lunch, supplemented with tankards of beer. It is also a place to have great fun, complaint, discuss politics, talk about football and hockey, and chat with others.

Always identify-able by the term: ‘hospoda’ or ‘pivnice’, pubs usually provide restricted menus generally comprising of buffet food like smoked herring or pickled cheese. Variety is offered at the beer taps, though, with ten degree and twelve-degree beverages (the twelve degrees is the stronger), černé (dark), řezané (mixed) and světlé (light) beer.

The pubs in Prague aren’t consistent in their quality, although new technology assists the body and the flavour. Lots of beer halls are now equipped with tanks that let them serve beers with fuller flavours because they haven’t been pasteurized (i.e. a process of heating that destroys microbes, along with the taste). These pubs, called ‘tankovna’, obtain the raw beer that goes inside the tanks in closed stacks, which have been popular with Czech connoisseurs in an increasing trend.

You have probably already heard that Czechs brew some of the world’s best beers. So where better to enjoy these pale, golden lagers and rarer dark varieties than in a traditional Czech pub? And once you choose from the recommended places listed below and order your first pint and start drinking, don’t be surprised that your glass is replenished even without asking. That’s part of the Czech tradition. Another tradition is sharing a table – it’s not unusual if someone asks you if they can share a table with you, and of course, you are expected to say yes.

U Zlatého Tygra (The Golden Tiger)

This is quite an old drinking hall with cool beer prices, just 36 CZK for 0.5l for the frothy Pilsner Urquell lager. When Bill Clinton visited the Czech Republic, Vaclav Havel showed him this pub – to see a real Czech Pub. The average beer tourist may find it hard to get a seat in this popular locals’ hangout, so make sure you get there early as seats fill up quickly. Have a pint while standing at the bar if all the seats are reserved for regulars. This is one of the world’s greatest beer bars, so treat it and its regular patrons with appreciation.

Pivnice U Černého Vola our pick!

This is an authentic and very nice beer hall: local clientele and local prices.

This long-established pub is located on the tourist route at Nerudova. Three excellent beers on draught with the rarely seen Bernard beer headlining over Budvar and Pilsner Urquell. It is very famous for cheap beer and is often crowded.

This is a small and the best microbrewery in Prague and is occupied mostly by locals. The restaurant’s extensive beer list boasts some fairly unorthodox flavours such as coffee and champagne. Czech lager at just 28 CZK for 0.5l is a great value. It is a really nice place to have a few pints.

Pivovarský Klub (“The Brewery Club” similar to Pivovarský Dům, mentioned above) offers the broadest range of Czech micro-brews in Prague blond wood modern restaurant close to Florenc Metro station. Each week, alternative beers are provided on tap on the bottom floor, whilst small breweries host frequent presentations down in the basement (each day 11:30 to 23:30; reservations in the evening are recommended; approximately fifty yards on the left-hand side from Florenc Metro station at Křižíkova 17, along Křižíkova).

Among the most pleasant public houses in Malá Strana, this “Small Home-owners Association” (which is the translation of the name) is situated apart from the tourist hub, on a quiet street right above the US Embassy. It offers Czech beer and quality food in a traditional ambience. It is open each day from 12:00-01:00.  Address: Tržiště Twenty-Three, Prague One. Website: www.baracnickarychta.cz. Metro Station: Malostranská.

U Vystřeleného Oka (The Shot Out Eye)

It is a pleasant pub with a beer garden and serves cheap food and beer. This pub pulls in all sorts of people, from backpackers to local writers.

It is a pub and microbrewery in Prague. The front facade of the 12th-century building has an old, highly decorated clock above its door. U Fleku is more expensive than other places, but you are drinking special dark beer brewed on the premises of the oldest Czech brewery in Prague while enjoying live music and chatting with tourists from all over the world.

The first Prague pub to serve Pilsner Urquell (back in 1843) is still recommended for a great and reasonable Czech meal. Spartan The interior is spartan, but the back patio is a surprising enclave surrounded by ruins and divided into distinct open-air rooms; it welcomes boisterous groups (you may hear impromptu singing) or those seeking a more romantic place.

Some bars in Prague have veered towards the tourist currency; U Medvídků has retained its traditional charm and is still a favourite with Czech locals. This is a straightforward Czech pub and easily large enough to accommodate everyone. There are numerous places to sit, and it will hold several hundred patrons at one time.  While there, be sure to sample the X Beer 33.  Aged for six months in an oak barrel, this dark bittersweet beer has an alcohol content of 11.8%.  Be sure to pace yourself or fill your stomach with specialities such as larded roast beef in sour cream with white bread dumplings.

This pub and beer hall is spread over two floors and is located in an ancient building that dates back to 1403.  The downstairs houses the restaurant and serves hearty Czech cuisine along with a selection of beer, wine, spirits and soft drinks.  The upstairs is more of a pub and attracts a younger crowd.  The music is upbeat, and there are often special evenings such as stag parties and hen nights.  Do keep in mind that the prices will go up significantly after 11:30 each night, so be sure to check the price before you buy.

Hospoda u Nováka, to the National Theater’s rear (i.e. not centrally located), is authentically Czech, with limited tourists. It looks after its regular customers (you will notice the traditional monthly beer tabs on a rack behind the door). Nostalgic signs from the communist era are all over. Throughout that period, pubs such as this were tight-knit communities that regulars used to escape from the daily depression of their lives. These days, U Nováka is light and smoky venue where customers can still merrily criticize whichever regime they are currently living under. Whilst the British menu displays the nicely crafted Czech classic dishes; it does not display the inexpensive specials of the day (each day 10:00 to 23:00).

Should you be adventurous and wish to sample the genuine article, this tough public house, with its’ worn-out sign, is near to the Rotunda Chapel (Prague 1 in Karoliný Světlé). The inside of it is authentic: full of smoke from cigarettes and visited by men wearing overalls.

This splendid and historical baroque structure in the Little Quarter stages the last main-stay for the locals, a 7th-century pub serving wholesome, traditional Czech food and Pilsner (Lesser Town Square, Five). Unpretentious but welcoming, waiters serve lagers for tourists from across the globe who sit on wooden benches in the cellars and halls of this venerable and cultured institution.

U Hrocha (In the Hippo)

An authentic establishment, found underneath the fortress (Thunovská, seventy). The inside of it has standard wood chairs and tables and excellent beer.

U Kalicha (In the Chalice)

This famous pub is located close to Vila Amerika. It is the location of a large percentage of Jaroslav Hašek’s book: ‘The Good Soldier Švejk’, as the hero of the story is a beer lover. Consequently, it is a tourist attraction, even for people who have never read the book. Nowadays, it is used as a restaurant more than a public house.  It can be found at Na bojišti, fourteen, in the New Town.

Food in Prague is similar to other central European regional cuisines, influenced by neighbouring Hungary, Poland, Germany and Austria. Most dishes are prepared with meat, particularly pork. The national dish is roast pork, served with thinly sliced bread dumplings and sweetish sauerkraut (vepřo-knedlo-zelo). Another to name is goulash (guláš) or svíčková—a strip of beef tenderloin served in gravy and topped with cranberry relish and a lemon. You’ll also usually find excellent roast duck, game meat or veal.

Bars and Pubs in Prague