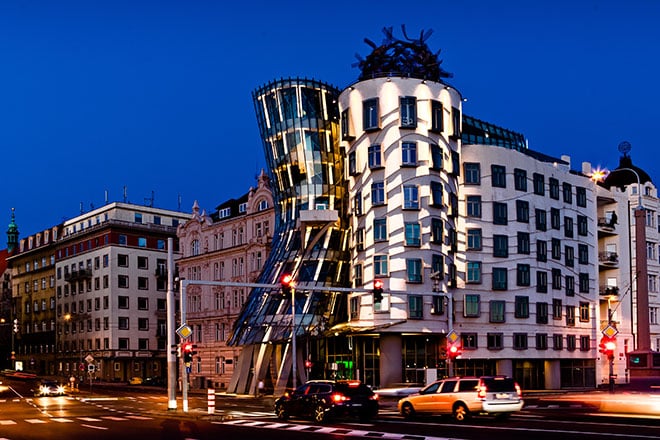 Luxury and a View of the Castle. Vladimír šMicer Has Opened a Hotel in the Dancing House With 21 Rooms

He wants to target tourists, businessmen and film producers, as well as Czech clients. There are apartments that are up to seventy square metres large in the towers, with direct views of Prague Castle.

The Dancing House, which stands on the Rašínovo waterfront in Prague, is celebrating twenty years since its establishment. This world-famous building was designed by the Croatian architect Vlado Milunić and the American-Canadian architect Frank O. Gehry, and it was built between 1994 and 1996.

These two apartments of the utmost luxury in both the towers are called the Ginger and Fred Royal Suite. The two towers of the house are reminiscent of dancing figures, which is why it is sometimes called Ginger and Fred, after the dancers Ginger Rogers and Fred Astaire. Guests have been living in the hotel since August. According to Peterková, cost-wise, the hotel will be near the five-star category after it is introduced onto the market.

The building serves as a gallery. It also has an administrative centre, restaurants and a viewpoint frequented by tourists on the roof terrace, with a glass bar, a unique outlook over the castle and a view of the city.

The notion that it is a unique building is demonstrated, for example, by the fact that the French chose it for a quiz during their presidency of the European Union among four buildings that characterize modern European architecture.

In two decades, the Dancing House racked up numerous awards and became one of the most photographed buildings in Prague. Since December 2013, the building has been owned by Prague Property Management.

The house stands on a site where a vacant space was left after the bombing of Prague. In the early 90s, Vlado Milunić came up with the idea of its development along with the president at the time, Václav Havel. Originally, it was going to be a house filled with mostly cultural purpose, shops or refreshments.

“It was easy to design and build such a house with the support of Václav Havel with an unlimited budget and with Gehry in the euphoria after the Velvet Revolution. My first project was very crazy, so the Dutch investor and I looked for an architect who would endorse it with his name. We first approached Jean Nouvel, but a building on an area of 500 square meters was too small and unimpressive for him. Through Nouvel, we received a connection for Frank Gehry, who happened to be in Geneva as a member of the jury in early 1992. Thus began our amazing collaboration,” recalls Vlado Milunić.

Dancing House, the Symbol of Prague’s Modern Architecture, Is Now Used as a New Trendy Hotel

A new 21-room four-star hotel has opened in the Dancing House in Prague. Two floors that had previously been used as an art gallery were transformed over five months into hotel rooms. Those rooms offer magnificent views of Prague Castle or the Vltava River.

The hotel is operated by Luxury Suites s.r.o. and one of five owners is football star Vladimír Šmicer, who played for Czech team Slavia Praha as well as RC Lens, Liverpool FC and FC Girondins de Bordeaux. He was also the first overnight guest in the hotel.

The Dancing House, one of Prague’s modern landmarks located on Rašínovo nábřeží, celebrated its 20th anniversary this year. It was designed in 1992 by Croatian Czech architect Vlado Milunić, working with Canadian-American architect Frank Gehry. The “new baroque” or deconstructivist-style building was completed in 1996. Václav Havel, then president of Czechoslovakia, was instrumental in getting the project started.

The lot had been empty since the end of World War II when a residential building that had been there was destroyed in an air raid. The Havel family owned a building adjacent to the empty lot. Václav Havel had long hoped to build a cultural centre on the site.

The building is sometimes called the Fred and Ginger Building after Hollywood screen dancers Fred Astaire and Ginger Rogers. The static and dynamic parts are meant to represent a society undergoing change.

The official opening of Dancing House Hotel was September 20, 2016, but the hotel had already been running in test mode to fine-tune the details. “The highlight for guests are apartments in the towers named the Ginger Royal Suite and Fred Royal Suite, which offer direct views of Prague Castle. All rooms are double and can have extra beds, and some rooms can be connected. Reviews and testimonials have been very positive, with most guests singing the praises of our Dreambeds brand beds,” hotel manager Ivana Peterková said.

“The hotel offers full service, including the classic 24-hour reception. For breakfast with a view, guests can relax in the Ginger & Fred restaurant, located on the seventh floor. We also cooperate with Glass Bar and the art gallery. Dancing House works in a unified manner, although its services are operated by several subjects,” Peterková added. The Glass Bar on the eighth floor offers views of the city on an outdoor terrace. The Dancing House Gallery now occupies the entry-level and lower level of the building.

Some of the rooms, such as the Ginger Suite and Ginger Royal Suite, have floor-to-ceiling curved glass windows, while others, like the Fred Deluxe Room and Fred Royal Suite, have more traditional windows, depending on which part of the building the room is in. The hotel may be expanded to more floors in the future.

Investor Václav Skala bought the Dancing House in 2013 and has been transforming it from being solely offices to finally meeting the original concept of Havel and the architects, which was to have a multifunctional space with cultural events and public access.

More information can be found on the official website www.dancinghousehotel.com

Share
Facebook
Twitter
Pinterest
Email
Print
Previous articlePayments for Parking for New Parking Zones in Prague 5 and Prague 6 by SMS
Next articleUber is Drawing Tourists to Prague, Most of Whom are Americans
RELATED ARTICLES
Dancing House