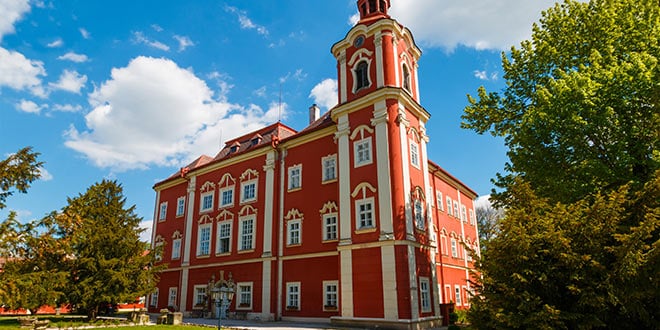 At first sight, this castle’s most striking features are its brilliant red façade and the refined beauty of its late Baroque architecture. The castle is also home to a unique collection of weapons from the Thirty Years War belonging to the Maltese knights. Visitors will also be captivated by the splendid interiors. After a visit, refreshments can be had at the historic brewery not far from the castle, where it is recommended to try the locally brewed beer. Dětenice is located to the west of Mladá Boleslav in the direction of Jičín.

In the year 1295, a Gothic stronghold stood in Detenice, and its owner, Lord Benes from Detenice and Wallenstein, started the rich history of the castle. Since 1503 Detenice belonged to the powerful Czech noble family Krinecky from Ronova. In 1587 a Renaissance chateau was built here, and later, in 1619, a bulky tower was added, which has been preserved up until now almost in its original form.

After the battle of White Mountain, the property was confiscated by the powerful nobleman Albrecht from Wallenstein for some 100 years. A very glorious period was the year 1760 when Count Jan Kristian Calm-Gallas purchased the chateau and had the Renaissance chateau rebuilt into a late Baroque one. It has been preserved in this form up to now.

In 1873 the chateau and the estate were gained by the knights of Malta. Under the Great Prior Othenius Lichnovsky from Werdenberg, the last structural alternations of the chateau occurred in 1878-1881. Maltese knights sold the chateau to the large-scale industrialist Adolf Bloch. The Spanish Queen wanted to buy the chateau because she fell in love with it during her sojourns here, but Vienna disagreed. Rudolf Bloch, the son of Adolf, lost his ownership of the chateau Detenice following misfortune on the stock market.

Emanuel Rehak (builder of the Vranov Dam) bought Detenice in an auction in 1927.

In 1948 the chateau was expropriated by the state, which let it run wild. In the years 1998-2000, the great restoration of the cultural heritage was underway, and the chateau Detenice was reopened at the beginning of the third millennium. 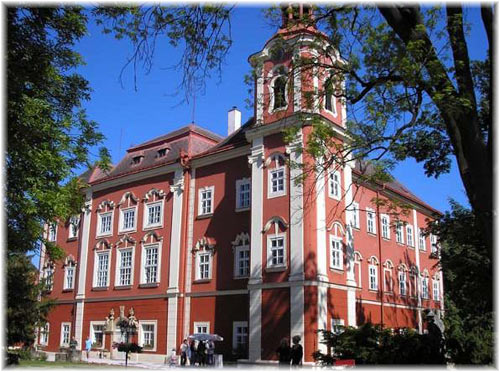