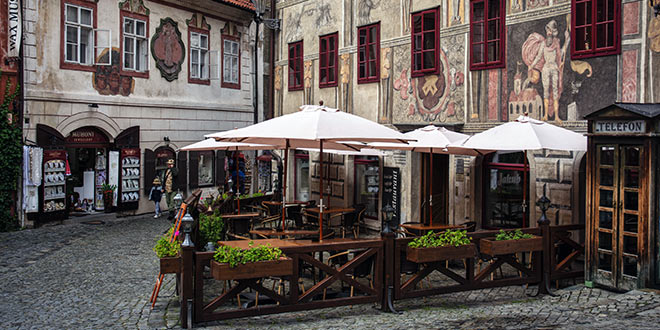 Český Krumlov has loads of places to eat, making it a great place for everyone to find something that really tickles their tastebuds. Be warned, though, because the best restaurants fill up quickly in the evening, so make sure you make a reservation.

Nirvana for meat lovers, this medieval barbecue cellar serves sizzling platters in a dark labyrinth illuminated by candles and the flickering flames of open grills.

It is set right next to the river and is bursting with character. It serves Czech food and drink and will even persuade you that the medieval food eaten here is both nutritious and tasty! Some of the dishes are much tastier than they sound, such as Buckwheat, millet, greasy meat and poor-mans porridge! It’s open every day from 11 am until 11 pm and is located on Parkán 104.

Nothing’s changed in this wood-panelled beer parlour for almost a century. Locals and tourists pack Na Louži for huge meals and a tasty dark beer from the local Eggenberg brewery.

This restaurant might not be the most spectacular of locations – it has been described as like “eating in a medieval garage” – but the locals love it because of the great steak and fish. Although the food is reasonably priced at about 350 CZK for a meal, the beer is expensive to keep the larger-louts away. It’s open from 5:30 pm until midnight.

The restaurant is both modern and also vegetarian and also boasts a stunning location right next to the river. Some of the best choices here are soy goulash or Mútábúr soup, both of which are delicious. It’s located on Parkán 105 and is open from 11 am until 11 pm.

Fisherman’s Restaurant doesn’t look like much from the outside, but appearances can be deceiving, as this is the best place in town to get fresh fish of a sort you’ll never taste again. You can choose from a huge selection, such as eel, shard, carp, trout and perch, plus many more. It’s on the island next to the millwheel and is open from 11am until 10pm.

It is a restaurant in the town’s fortifications and has a beautiful terrace overhanging the river. You’ll get filling and hearty traditional Czech food here, and it is also near the accommodation on Rooseveltova Street. It’s on Horní 26 and is open for long hours every day.

This pub is a great place to head for some cheap food that’s also very tasty. It serves a range of soups, salads and main meals and also boasts some of the cheapest alcohol in the town. It’s also hectic until very late, making it perfect for night owls. It’s open from 10 am-10 pm, although the bar stays open until midnight. Find it on Vezni 99.

It is a quiet teahouse, one of many built in the 1990s to give people an alternative to the loud pubs that dot the town. Although it is exotic and certainly not a typical Czech restaurant or café, it is the place to go if you want to mix with the locals and somewhere to head if you want some peace and quiet away from the tourists. It’s open daily from 1 pm until 10 pm and is on Latrán 54.