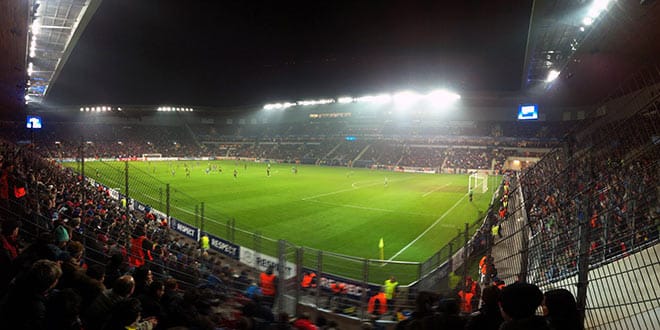 The new Eden Stadium was opened on 7th May 2008 on the site of the former Slavia Stadium. It is home to Slavia Praha, one of the two best football clubs in the Czech Republic. It is a very new, modern and luxurious stadium, including shops, a bank, offices and even a hotel. The Stadium, built in the ‘English’ style, is unique in the Czech Republic in terms of its philosophy. A fan should come ten minutes before the start and leave when the match is over.

The scope is unique as well – there are two huge screens, 14 refreshment stances, 45 luxurious skyboxes, a hotel and a few restaurants. The architect Martin Vokaty, creator of the O2 Arena, sums it up as ‘a piece of quality, immaculate architecture’.

The new Stadium is even better than the two newest football stadiums in the country – Stinadla in Teplice and Prague’s GENERALI Arena. The Eden Stadium has left behind the Axa Stadium of Sparta in every area except capacity, which is similar.

The Stadium was built in 19 months, and the cost exceeded 40 million Euros. A luxury setting, which was until now provided only for hockey fans in the O2 Arena, is finally available for football fans too. “The opening of the O2 Arena pushed the hockey culture forward, and the Slavia Stadium will have a similar effect. I am sure this is the way to get rid of stadium violence.” said Vokaty, referring to the English style of the Stadium.