Funicular Railway to Petrin Hill is located just next to the tram stop Ujezd (trams 12, 22, 23) in Lesser Town. Railway runs daily from 9 a.m. to 11:30 p.m. (11:20 p.m. from November to March) in 10 to 15-minute intervals and is operated by the public transport company. Funicular stopping halfway up the hill before continuing to the top. Fare is the same as the ticket for any public transport.

Funicular has a long history, dating back to 1851 when it used to work on water overbalance mechanism. After the First World War, the funicular railway has been bought by the Electric Company of the Capital City of Prague, which started a reconstruction of the old mechanism. The funicular restarted its activity in 1932 after being electrified and the run-up to 1965, when, due to massive landslips at Petrin Hill, had to be interrupted for about 20 years. In 1985 it started again to offer tourists and locals a superb view of Prague.

At Petrin Hill, you can admire the magnificent view over Prague, see the Astronomical Observatory, or climb the mini Eiffel Tower or stroll through Petrin gardens. Do not miss the beautiful Rose Garden, which opened in 1932.

Tip: Nebozizek Restaurant – why not stop at this restaurant which is located halfway to Petrin Hill. It is not a 5-star restaurant, but views from the terrace are just amazing. The place is popular, so it is wise to book a table. 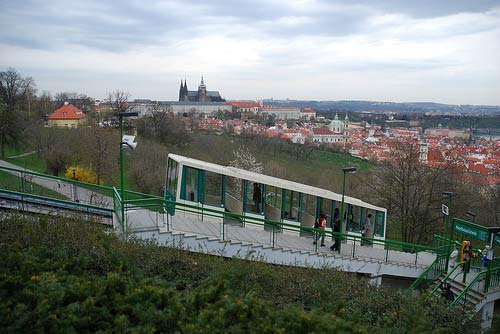