Get to Know Prague With the Eyes of Homeless People 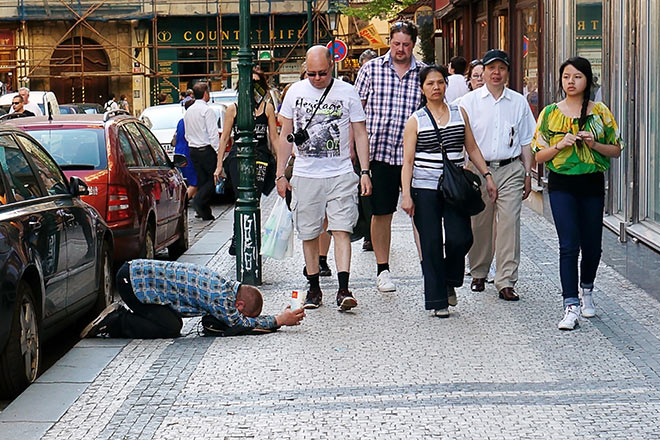 The homeless have been accompanying tourists for five years.

Tereza Jurečková had the idea for a courageous project called Pragulic, which shows people the capital of Prague from a homeless perspective arose. In addition, the project helps homeless people to get off the street and get a roof over their heads again. The opportunity to take part in unconventional tours is also offered in Olomouc and České Budějovice.

How do you evaluate the project itself over the past five years?

When I look back, I see what a huge piece of work we have done. We have really started from scratch. We had no money, no contacts, no experience. We were just three buddies who wanted to start a project.

Were your expectations met?

Not only have they been fulfilled, but they have also been far overcome. I believed it would be a success, but I didn´t think that much. In the end, it became my job and a brand that will accompany me in my personal and professional life.

Is there ever-increasing interest in the tours?

Year after year, customers want more. Regularly, we have sold out some guides for two months in advance. Interest among groups, especially students, who regularly arrive from abroad is also rising.

How many homeless people have you ever employed as guides?

As of now, twenty-one has joined the project in the guided tour. Of course, there are many more people who are in contact with us. We have nine guides in Prague.

What kind of cash rewards do they get?

Guides get a reward of over three hundred crowns for each tour, and often customers give them extra tips. In total, they make quite good money in our country, and at the same time, they can lower their cost of living because we offer them many benefits. If one wants, he has the maximum support from us to get out of the street.

Are you checking on how they behave with the money?

Spending the money is entirely up to them. We work with people who are motivated and more or less responsible. We are not under the illusion that they always invest properly, but that happens to every one of us.

Do you observe the guides who have been with you for a long time as their new mission changes their lives?

At work, they find meaning and the ability to make money. They have housing that they can afford with little or no effort to keep up. They get off the street and get in touch with new people, which forces them to change their routines.

Is it difficult to work with homeless people?

The most difficult thing is to endure it on a psychological basis. Guides are in hard life situations, and their problems get transferred to you. It’s very exhausting. I never had a problem with them not respecting me. I am primarily an employer and a person to whom they can talk. I am less of a friend; that was the case at the beginning, but that relationship changes, of course, over time.

Have you ever been in a dangerous situation in such an environment?

I would not say a dangerous situation literally, but an unpleasant one. I’ve found myself several times in a dormitory with a few workers and homeless people who, after a while, will make dire suggestions. I’ve even witnessed a few attacks among the homeless, and in that case, you have to be alert and react quickly.

What do you plan for the future?

For the homeless, there is still a lot to do. We want to ensure dignified and interesting housing and mobile showers, and we also want to allow people to help the homeless. We have many new plans, so we are looking for suitable partners and investors to help us realize them.

Do not Miss in Prague