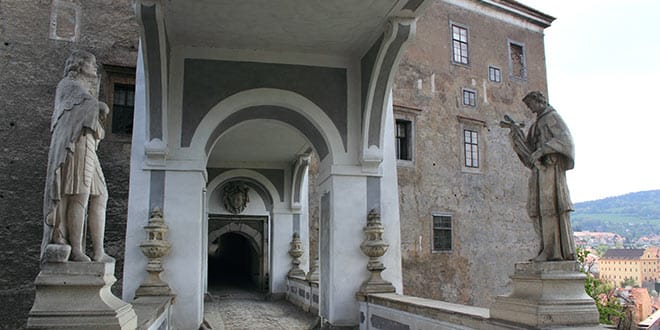 Its original medieval owners, the powerful Rozmberk family, called it the “City of the Red Rose” after their family crest. Later the city became the property of the Schwarzenberg aristocracy. The huge castle dominates the town centre, looming over the red-tile roofs and the labyrinthine, cobble-stoned streets. The castle offers a wealth of architectural details and 15th-century treasures. Picture-postcard houses crowd the hills and the banks of the river that snakes through the heart of the city. Through a courtyard, we find a museum dedicated to Cesky Krumlov’s most famous citizen, the early 20th century painter, Egon Schiele. In a medieval cellar tavern, the waiters dress in period costumes. The Germans called the town “Krumme Aue” or “the crooked meadow” – and as we follow the twists and turns of its little streets and stone bridges, we understand why. The undulating curves of the Vltava only serve to enhance the city’s appeal. Furthermore, the curves don’t stop at the river. If it appears to your eye that many of the houses have distinctly odd outlines, well, they do! Medieval builders, who were blissfully unaware of the existence of right angles, constructed many of these buildings.

Construction of the town and castle began in the late 13th century at a ford in the Vltava River, which was important in trade routes in Bohemia. In 1302 town and castle was owned by the House of Rosenberg. Emperor Rudolf II bought Krumau in 1602 and gave it to his natural son Julius d’Austria. Emperor Ferdinand II gave Krumau to the House of Eggenberg. From 1719 until 1945 the castle belonged to the House of Schwarzenberg. Most of the architecture of the old town and castle dates from the 14th through 17th centuries; the town’s structures are mostly in Gothic, Renaissance, and Baroque styles. The core of the old town is within a horseshoe bend of the river, with the old Latrán neighborhood and castle on the other side of the Vltava. The town became part of the Austrian Empire in 1806 and Austria-Hungary in 1866. 8,662 inhabitants lived in Krumau an der Moldau in 1910, including 7,367 Germans and 1,295 Czechs. After World War I, Krumau belonged from October 1918 until September 1919 to Upper Austria within the Republic of German Austria. In November 1918 Czech troops occupied the town. During the interwar era, it was part of Czechoslovakia. Between 1938 and 1945 it was annexed by Nazi Germany as part of the Sudetenland. The town’s German-speaking population was expelled after World War II and it was restored to Czechoslovakia.

During the Communist era of Czechoslovakia, Krumlov fell into disrepair, but since the Velvet Revolution of 1989 much of the town’s former beauty has been restored, and it is now a major holiday destination popular with tourists from Germany, Austria, and beyond. In August, 2002, the town suffered from severe damage in the great flood of the Vltava River.