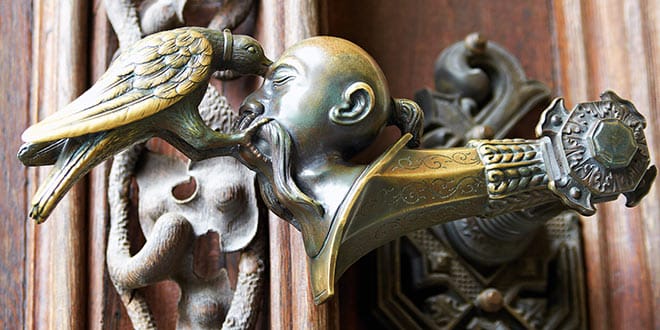 Hluboká first entered history in 1285 when the estate was ruled by Vítek, brother of Záviš of Falkenštejn. After the death of Přemysl Otakar II, the Vítkovici used the difficult political situation and achieved the most powerful position in the country. Záviš of Falkenštejn, a member of the family, married the Queen Mother, Kunhuta, and governed for a time in place of the boy-King Wenceslas II. After Kunhuta’s death, Wenceslas II believed the slanders about his stepfather and had him imprisoned in Prague on charges of high treason. To gain the castles of Záviš’ supporters, the king had him taken by soldiers from one castle to another, threatening to have Záviš executed if the castles were not handed over to him. But at Hluboká, the army met with resistance from Vítek, brother of Záviš, who did not believe the threat would be carried out and refused to give up the castle. The Opava Duke Nicholas, the stepbrother of the king, had Záviš executed in 1290 on the “Punishment field” in front of Hluboká with the consent of the king.

The Hluboká estate was pawned to a succession of owners and was in a poor state until it came under Vilém of Pernštejn (from 1490). He was a good manager and had several ponds built in front of Hluboká, among them Bezdrev pond, and also had the castle restored.

The Hluboká estate belonged to the Crown until 1561 and was only pawned to various owners, but in that year, Joachim of Hradec offered to purchase it for 115,000 kopa (1 kopa was 60 groschen) with hereditary rights. Thus he gained the estate together with Protivín castle, the small towns of Lišov, Kamýk and Purkarec and 43 villages.

The building operations by the Italians, Antonín and Vincent Vogarelli, were halted by the early death of Joachim and were resumed only when his son, Adam, took over the estate. He commissioned the builder, Baldassare Maggi, to rebuild the castle as a Renaissance mansion around two courtyards.

The last owners of Czech origin, the Malovec family of Malovice, lost the mansion through confiscation. It was sold in 1622 to the Spanish General, Baltazar Marradas, for 200,000 guldens, covered by war debts. Marradas considered Hluboká as “fruits of war” (Fructus Belli) and had this inscription put on the mansion. The Spanish owners were replaced in 1661 by the Schwarzenberg’s, who owned Hluboká without interruption till 1947.

Jan Adolf Schwarzenberg became the founder of the family property in Bohemia. The well-managed estate, economic gains and property inherited from childless Marie Arnoštka of Eggenberg enabled Adam František Schwarzenberg at the start of the 18th century to have Hluboká completely reconstructed. He commissioned the builder Pavel Ignác Bayer to carry out this work.

The Schwarzenbergs created a really representative and comfortable residence at Hluboká. In this period, the Viennese court adopted French manners with a liking for ceremonials, balls and game-hunting. Stables, barns and dog kennels were built on the site of the demolished fortification walls, and a small French park was laid out below the mansion. Hluboká then remained unchanged until 1841, when it was given its present romantic appearance.

From the 1830s, the Schwarzenberg’s played with the idea of improving the entrance to the mansion. Out of several designs, they chose in 1835, one by Rohrbacher by which the farmyard in front of the main facade was abolished, and the riding school moved to the side. A few years later, this plan became part of the entire transformation of the mansion into a romantic Gothic style, at that time popular among the nobility.

Jan Adolf II and his wife, Eleonora Lichtenstein, made several journeys from 1825 to 1838 to the industrially advanced, and for Europeans, fashionable England, where they became acquainted with Tudor and Elizabethan architecture. Windsor Castle particularly enraptured Eleonora, and so Hluboká was to be “….in gothischen (Tudor) Style, nach deyn Muster des kóniglichen Schlosses Windsor erbaut…. ” – “built in the Gothic style of the royal Windsor Castle”. The work was entrusted to Viennese architect František Beer who designed and supervised the operation and his assistant, Wilhelm Neyenhofen. After Beer’s death, it was completed by Damasus Deworezky.

The princess often came with ideas, selecting motifs for the interior decoration out of books or from what she had seen in England. The books by Owen Jones, “Design for Mosaic and Tessellated Pavements” and “The Grammar of Ornaments” has been preserved in the Hluboká library.

The mansion was finished for the greater part by 1855, and the couple was able to move back into the mansion. In 1871 the heir to the throne, Archduke Rudolph, laid the last stone in the second courtyard. A large riding school with coach-house, linked to the mansion by the winter garden, finished off the picture. In place of the demolished farm buildings and adjoining fields, an extensive English park was laid out in which 11,597 trees and 2180 shrubs were planted in 1851 alone.

The rooms of the mansion were furnished in the style of English residences of the late Renaissance period, i.e. in Elizabethan and Jacobean times. The English oriel windows of small glass panes in a framework of lead, i.e. lattice windows with coats-of-arms painted on the glass, were a new and quite unusual type in Central Europe. The choice of furniture, pictures and other items, including carved wood panelling on the walls and a large collection of rare weapons and armour in the armoury, was subordinated to the desire to represent. Today the former riding school houses the Aleš South Bohemian Art Gallery. In reserve not far away, there is a deep furrow called the Devil’s Ditch. Legend has it that the devil made it with the steward of Hluboká estate, de Bossi, harnessed to the plough. During his life, he had harassed the serfs so much until he was damned.