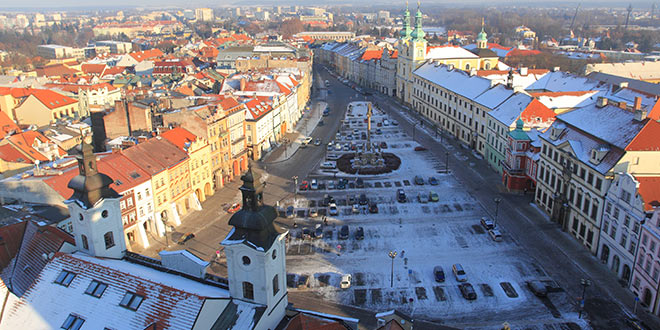 Hradec Králové has been the regional capital of Eastern Bohemia since the 10th century. The city is situated just 100 kilometres east of Prague. With a population of 100,000, this green city of parks and gardens lies at the confluence of two rivers – Labe and Orlice – and at the intersection of major roads and railway lines. It is the seat of the Bishop and a centre of trade, industry, science and education. The backbone of cultural life in the city is provided by the Klicpera and Drak (Dragon) theatres, the city’s own philharmonic orchestra, the Museum of East Bohemia and the Gallery of Modern Art. At the heart of the old town is an attractive “triangular shape” square known as Žižkovo náměstí after the Hussite warrior, Jan Žižka, who is buried here. Overlooking the square is the 14th-century Cathedral of the Holy Spirit. The free-standing belfry (71.5m) is known as the White Tower and was added later. Just in front of the tower is a handsome Renaissance town hall. On the southern side of the square, the Jesuit Church of the Assumption has an attractive 17th-century interior. Two leading art nouveau architects, Osvald Polívka and Jan Kot, worked in Hradec Kralove. Polívka designed the Gallery of Modern Art, while Kot was responsible for the Regional Museum of East Bohemia just outside the Old Town.

The first mention of Hradec Králové goes back to the year 1225. The old town centre – with Gothic, Renaissance and Baroque buildings designed by architects Giovanni Santini and Carlo Lurago – recalls the time when Hradec Králové was the dowry town of Bohemian Queens. From the perspective of town planning, few towns in the Czech Republic can match Hradec Králové. The more modern buildings in the art nouveau and functionalist styles are the work of the famous Czech architects Jan Koťera and Josef Gočár. Their concept of town planning is still admired today and is one reason why Hradec Králové became known as the “Salon of the Republic”.

Church of the Assumption – built by the Jesuits in the 17th century and designed by Carlo Lurago.
Church of the Holy Spirit – this brick-built, Gothic cathedral dates back to the beginning of the 14`” century. The choir, built in 1463, bears the oldest coat-of-arms of the town.
Masaryk Square – a typical example of the architecture of Josef Gočár, who used simple Cubist elements and shapes for the facades, providing a background for the monument to T G. Masaryk built by Otto Gutfreund in 1926.
Museum of East Bohemia – an art nouveau building on the Labe emban¬kment, one of Jan Kotěra’s most out¬standing achievements, built in 1909 -1912.
St. Nicholas’ in Jirásek Park – a small wooden Orthodox church originally built at Malá Polana near Medzilaborce in Slovakia in 1502 – 1510, transferred here in 1935 on the initiative of Hradec Králové mayor Josef V.B. Pilnáček.
The White Tower – built of white sandstone (hence its name) in 1574 – 1580. It is 72 metres high and contains Augustin, the second largest bell in Bohemia.
The Bishop’s residence – one of the most beautiful baroque buildings in the city built in 1709 – 1716. Inside, you can find a stone portal designed by Giovanni Santini. 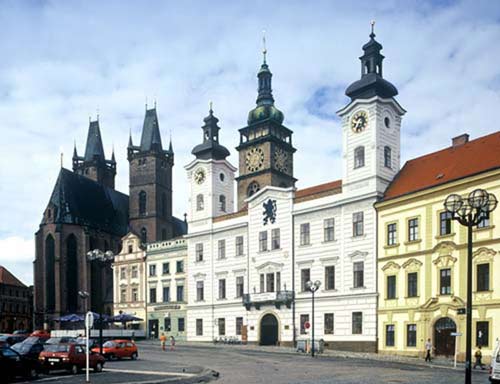 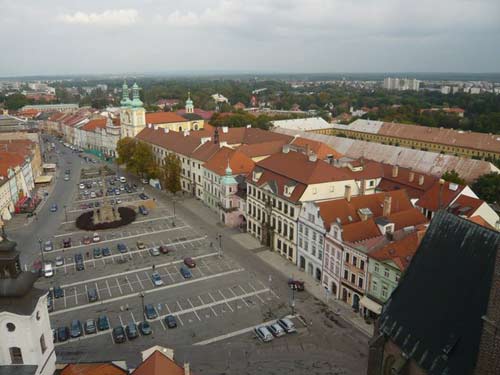