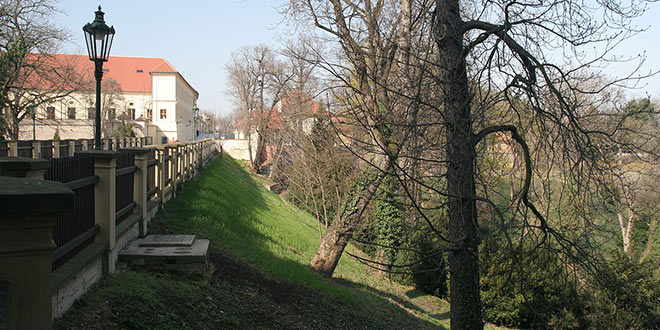 This is a naturally occurring gorge within the complex of Prague Castle. Its’ area spans 8 hectares, and it is intersected by the Brusnice Stream. This dike is presently partitioned into 2 sections – lower and upper. Originally, the gorge was utilized just as a barrier for protection, but under Rudolf II’s reign, deer were moved here. They were hunted to provide the kitchens of the castle with meat and for entertainment. This is how the title “Jelení příkop” or “Deer’s Dike” originated.

At the gorge’s upper end, a riding school was constructed in the seventeenth century. The Royal Gardens were linked with the other buildings in the castle by the Powder Bridge, which led here. During Maria Theresa’s time, this bridge was substituted for an earthen barrier, which divided the dike into a lower and upper part. The barrier had a tunnel built into it at the close of the century just gone, thereby opening each part of this dike to the general public.

At the foot of Horní Jelení příkop (the upper part of Deer’s Dike), you will discover an artificial cave, a large meadow and the bear handler’s previous dwelling (T.G. Masaryk established a bear pit here for all of the bears he was given as gifts from Russian legionnaires). Dolní Jelení příkop (lower Deer’s Dike) is an expansive forest park, which you can visit to have a break from the bustle of the tourists in Prague Castle.

This is located close to the president’s house on the side of the hill over Horní Jelení příkop (Upper Deer’s Dike). The design by Josip Plečnik, the architect, indicates that this was constructed between 1922 and 1924. There is an unexpected view, from this location, of the palace of the Archbishop, the Saint Vitus Cathedral and some other Prague Castle monuments. This look-out position was forgotten about for a considerable time because the previous ruling power, under Tomáš Garrigue Masaryk (the 1st president), did not do anything which has ever been commemorated. This is the reason it was restored completely during the 1990s.