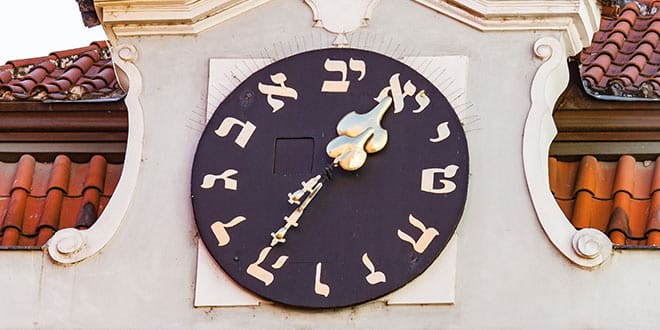 The Jewish people of Prague have played a massive role in the way that the city has developed, more so than any other Jewish community in the continent. This is immediately evident when you look at the Old Town Hall, which was built in the early 1900s, and portrays a rabbi as a symbol of the country’s faith.

The first records of Jewish people coming to Prague date back to the 9th century, and they are thought to have arrived from the area of the world now called Iraq. They were specifically invited to settle in Prague by the Bohemian kings, and they were almost entirely merchants – a ploy designed to encourage trade between the two areas. In the beginning, they populated both sides of the river, but before long, a Jewish community had emerged in the Old Town, most probably due to anti-Semitic attacks.

This ghetto was enclosed in the 13th century, as Rome decided that Jews and Christians should live in separate areas of the city. It suffered a number of attacks by the Christians, but the most notorious and bloody of these was in 1389 when Christians slaughtered 3,000 Jews over Easter weekend.

Three of the most famous Jewish buildings in the city – the Jewish Town Hall, the Maisel Synagogue and the High Synagogue – were built during the reign of Rudolf II (1576-1612). They were gifts to the ghetto from the Minister of Finance, Mordechai Maisel, who himself had been brought up in the Jewish area of the city. While this construction was taking place, Rabbi Low, the chief rabbi of Prague, studied kabbalah and apparently building the Golem. When you visit Prague, you can find the final resting places of both these men in the Old Jewish Cemetery.

In 1648, the Jewish community pleased Ferdinand III when they managed to fight off the Swedish army, who were attempting to invade the city. As a reward, he made the Jewish ghetto larger. This favour with royalty did not last for long, though, as one hundred years later, Maria-Theresa exiled all of the Jews but was forced to invite them back after just three years due to the massive tax deficit it had created. A few decades later, Emperor Joseph II introduced the Edict of Tolerance, which allowed all non-Catholics the right to education and abolished the compulsory dress code and opened up the Jewish ghetto. The ghetto is now called Josefov in his honour.

Because the ghetto was now open, the richer Jews started to leave, which allowed poorer citizens to move in, therefore turning the area into a slum. In 1893 most of the ghetto was razed, and in its place, the Art Nouveau Josefov was created, which can still be seen today.

When Czechoslovakia was founded in 1918, full civil rights were promised for the Jewish people. This promise was driven home by Tomáš G. Masaryk, who promised that there would only be one class of citizen – much as George Washington had previously done in the USA. His work was continued by Eduard Beneš, who was an early supporter of Israel. When the Nazis captured Prague, the Jews were not allowed to work or go to school and were forced to wear badges identifying themselves as Jews. In November 1941, the Nazis started transporting Jews from Prague to Terezín, which was about 60km away.

During the War, about three-quarters of the Jews in Prague lost their lives in the camps, either through starvation or through being murdered. The aftermath of the War, when Communism took hold of the city, led to the Jewish culture decreasing even further, as religion was not something that the Communist rulers liked to see – in fact, anti-Semitism was ingrained within the political framework. It wasn’t until the Velvet Revolution and the fall of Communism that the Jewish culture has started to be reborn in Prague. There are now about 6,000 Jewish people in the city, with 1,800 active members of the religion.

Some of the arrays of things that signify this increased presence of Judaism in the city include many Jewish educational programmes and the increased prevalence in kosher restaurants. There are now four in the city. The Jewish Museum is also an incredibly popular tourist attraction and has six different sites. If you want to see what the ghetto looked like before it was demolished, you should visit the Španělská synagogue, which has old photos of the area. It will also show you information about some of the most famous Jewish writers from the city, such as Franz Kafka, and teach you about the first Jewish settlers in the city.

You can learn more about Judaism in Prague by joining one of the Jewish Walking Tours, or you can rent an audio guide as you walk around the sites of the Jewish Museum.