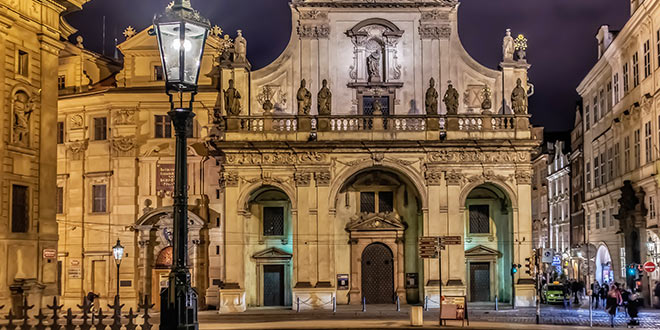 When Emperor Ferdinand I invited the Jesuits to Prague in 1556 to spearhead the Counter-Reformation, they moved into the former monastery of St. Clement. In the 17th century, the Karolinum merged with the Klementinum, and they undertook a building programme that lasted over 150 years. When the Jesuit Order was dissolved, and the Jesuits had to leave Prague in 1773, the Clementinum complex was taken over by Prague University and the National Library. It is the largest complex of buildings in Prague, after Prague castle, including the Church of St. Clemens and the Church of St. Salvator. The walls of the Baroque fortress enclosed a college, schools, churches, a library, a theatre, an observatory and a printing shop. Concerts are often held in the Mirror Chapel (1724-30) 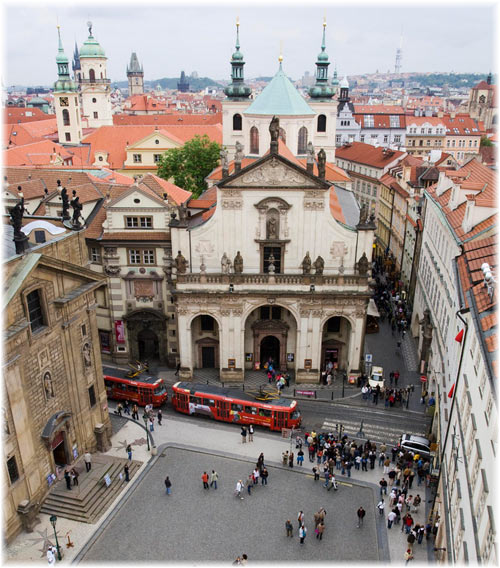 Tour of Clementinum includes the Baroque Library (Baroque Hall), Astronomical Tower, Meridian Hall and Chapel of Mirrors. You will have an extraordinary opportunity to enjoy the most beautiful view of Prague old town and other nice sights from the gallery on the top of the Astronomical Tower.

The chapel consecrated to the Annunciation of our Lady was built after 1720. Its harmonious decoration – where the marbled walls and floors are well-matched with its gilded stucco ornamentation, with parget colours and ceiling frescoes, with the final touch of a mirror-decorated ceiling – make it a unique sight. Jan Hiebl created the fresco. Each of the ceiling bands illustrates a verse of the Hail Mary prayer. Vaclav Vavrinec Reiner created the mural paintings with themes from the life of the Virgin Mary. The Mirror Chapel is the only historical building of Klementinum open to the public every day during the concerts.

The Baroque library hall was finished in 1722. Its appearance and arrangement – for example, the labels on library bookcases – survive intact. Thus it provides us with an example of the setting of an authentic Baroque library. The books in this hall constitute a collection of printed theological literature written in all languages except Czech, gathered as they arrived at the Klementinum from 1600 until recent times. The books with whitened backs and red marks have been here all along since the Jesuit period. The ceiling decoration, created by Jan Hiebl, symbolizes the antique wisdom and learning as the basis, leading to Biblical prophets and later to Christian teachings. 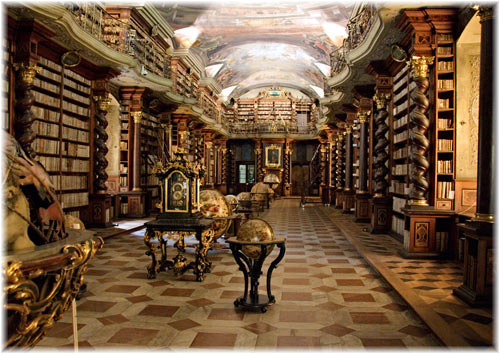 The Astronomical Tower was erected together with the completion of the Baroque library and the Mirror Chapel, all of this undertaken under the direction of the university chancellor Frantisek Retz. The tower is crowned with a statue of an Atlant holding the celestial sphere on his shoulders. Some historians attribute this sculpture to the atelier of Matyas Braun. The tower was used for astronomical observation till the 1930s. In 1938 the astronomers moved out of Prague to a new observatory in Ondrejov. (read more) 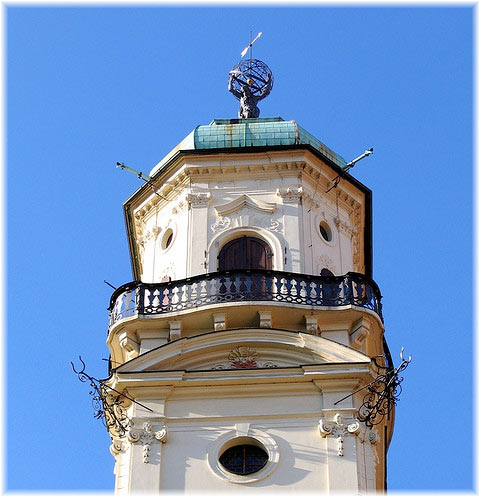