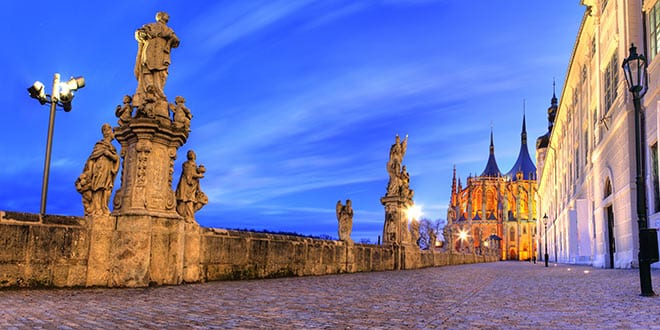 Thanks to its silver mines, which were open for 250 years, Kutna Hora was the second most important town in the Bohemian kingdom after Prague. During the 14th century, its population was equal to that of Londons. Today it is just a small provincial town with just over 20.000 people. There are plenty of beautiful Gothic churches to see, such as St. Barbara´s Cathedral (1388 to 1565), one of the most beautiful Czech Gothic buildings, the Italian Court (Vlassky dvur) with its Royal Mint, where the famous Prague groschen was minted (which at that time represented the hard currency of Central Europe), the Stone House, and the St.James Church etc. In the year 1995, Kutna Hora was declared as a world heritage site and protected by UNESCO. These days the town benefits from tourists and from the Philip Morris tobacco factory. North of Kutná Hora is Sedlec, where, in the 19th century, the Cistercian ossuary was turned into a macabre work of art by František Rint. There are bone monstrances, chandeliers and even a Schwarzenberg coat of arms. 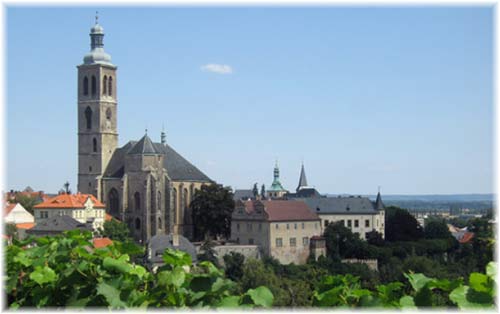 St. Barbara’s Cathedral – St. Barbara is actually the patron saint of miners and this cathedral, dedicated to her, is one of the best examples of Gothic architecture in the whole of Europe. The inside and outside are both lavishly decorated, and the massive windows are an absolute joy to behold. The side chapels are mostly decorated in a unique and interesting way and often show miners working as they would have done at the time of the cathedral’s creation. The stained glass windows weren’t added until the 20th century, though. Other objects of interest within this cathedral include the pulpit dating from 1655, the organ case from the 16th century and the altar, which is a replica of the original Neo-Gothic design.

Ossuary (Sedlec) – cemetery chapel from the end of the 14th century, rebuilt in the baroque style by J.B. Santini. The bones, which have decorated the interior of the chapel since the 16th century, were from the adjoining cemetery.

Italian Court – originally the central mint where the Prague groschen was produced. It became a temporary seat of the king after reconstruction at the end of the 14th century.

Christi Chapel – an unfinished Gothic building from the turn of the 15th century, intended as an ossuary. It is one of the few completely preserved examples of High Gothic. The terrace affords an impressive view of the town. 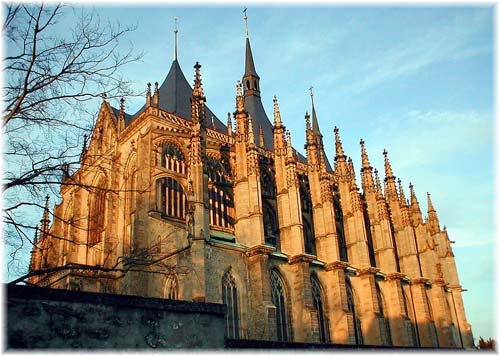 Hrádek – originally a Gothic palace with courtyard and tower built before the year 1420. Today it houses the exposition of the Czech Silver Museum.

Cathedral of the Assumption – used to belong to the Cistercians. It is one of the most significant works of Czech Gothic architecture of the 141 century. It was the first cathedral built in Bohemia. Santini gave it its final appearance in the baroque-Gothic style at the beginning of the 18th century.

Sankturinovský House – originally a Gothic building dating back to the 13′ century with a richly decorated chapel. Today, it houses the Information Centre, the Felix Jenewein Gallery and the Museum of Alchemy. 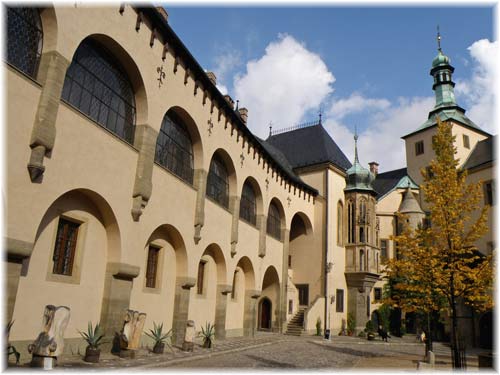 Kutna Hora is situated 65 km east of Prague. By bus 70 minutes from Florenc station, by train 55 minutes from the main station. Tickets for train or bus cost around 70 CZK. If you don’t want to spend use public transport, consider booking an excursion. 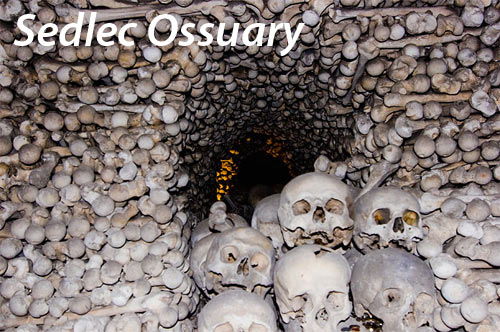