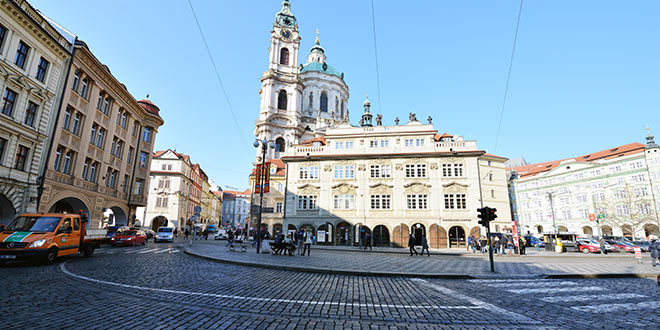 This square lies at the heart of Lesser Town. Most buildings around the square have a medieval core, but all were redesigned in the Renaissance and Baroque periods and are a bit overshadowed by the busy tram intersection. 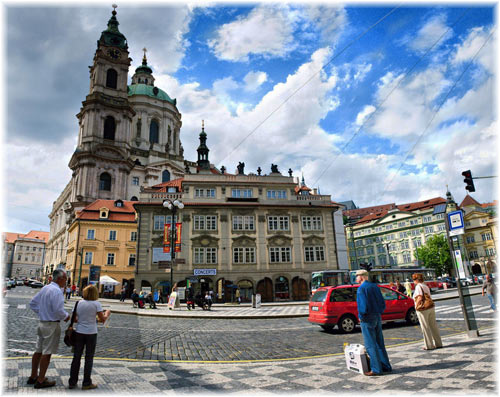 At the centre of the square is the magnificent Baroque St Nicholas Church and former Jesuit College. Along its upper side runs the vast neo-classical façade of Lichtenstein Palace. All around are grounded houses converted into cafés, quaint old pubs, restaurants and small shops. On the eastern side of the square is the attractive Renaissance town hall (1617-22) with its Renaissance facade. Next door is the house ‘At the Flavins’, with a colourful fresco of the Annunciation. Other significant buildings include Smiřický Palace and Baroque Kaiserstein Palace.

Legend says that Lesser Town Square used to be a prison area. When the relics of murdered Přemyslid Prince St. Wenceslas were brought to Prague Castle for burial, the bulls dragging the carriage suddenly stopped in front of the prison. Because St. Wenceslas was a right-minded person who did not allow any injustice, somebody got the idea that there could be an innocent person imprisoned there. The prisoners were taken out, and the shackles of one of them fell down spontaneously. Then the bulls continued their way. The prisoner was found not guilty, and a chapel of St. Wenceslas was later built at the palace. The present St. Nicholas Church replaced this chapel.