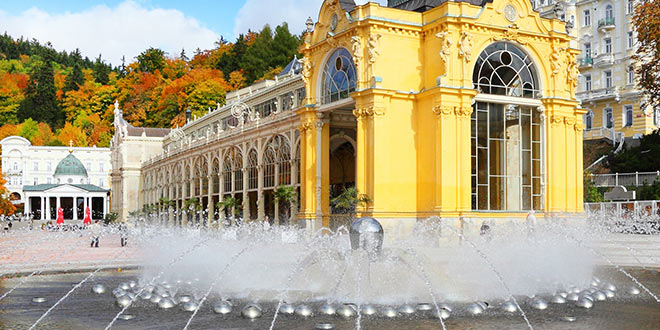 Do you suffer from high blood pressure, kidney stones, angina pectoris, obesity or diabetes? Are your kidneys, stomach, intestines, joints and liver as healthy as they should be?

Treatment for these and other diseases is available in one location and, what is more, you don’t have to go to the other end of the world to get it. This magical location is called Mariánské Lázně. It possesses such a wide range of different mineral water springs that it is unique. 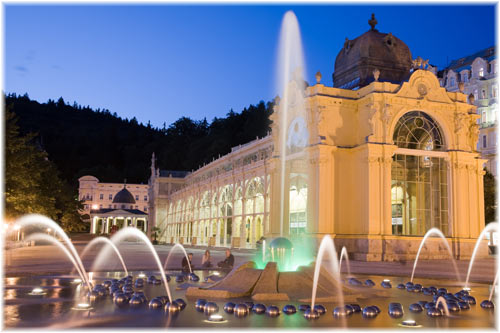 The most endearing of the spa towns in Bohemia, Marienbad (Mariánské Lázně) is relatively new to spas: It was only constructed in the early nineteenth century by the Teplá monastery abbot. Some eight miles (twelve kilometres) eastwards, Václav Skalník crafted the landscaped gardens. In just several decades, this remote area in Bohemia’s forest was a wonderful mix of pavilions and parks, gathered around forty therapeutic springs.

The renowned German author, Goethe, was a famous early tourist in the 1820s. Russian author, Nikolai Gogol, wrote some of his book ‘Dead Souls’ while residing here and, in 1848, Wagner wrote Lohengrin at Mariánské Lázně. Bettering these artistic stamps of appreciation was the presence of royalty, with Emperor Franz Josef from Austria and King Edward the seventh of England being celebrated and frequent visitors. Today, Marienbad is particularly popular with visitors from Germany.

The often pompous and stately buildings have been renovated after years of gradual decay. The mixture is superior to the individual parts of all the Czech spas, and this is possibly the most alluring and harmonious.

The major road, Hlavní, that spans the town’s length is a virtually uninterrupted series of coffeehouses, decadent turn-of-the-century apartments and hotels. Here, as well, you will discover a tiny museum (called Dion E Chopin) inspired by another renowned tourist, Fredéric Chopin (the Polish composer who lived from 1810 to 1849). He visited in 1836 to chase the young lady who became his fiancée. He never married her, though, due to his declining health. Throughout the 3rd week in August, this spa holds a festival in memory of Chopin. All of these constructions, lots of which have balconies, face out on the Slavkov hills and spa gardens. These buildings are showy and splashy and extremely ornate, although, somehow, they maintain their humility. On Ruská, behind Hlavní, is the previous Anglican church, presently a hall for exhibitions, and the Orthodox, Russian, 1902 church. It is worth visiting this Russian church to witness the elaborate iconostasis made from porcelain and usually deemed the biggest individual chunk of porcelain on the planet. 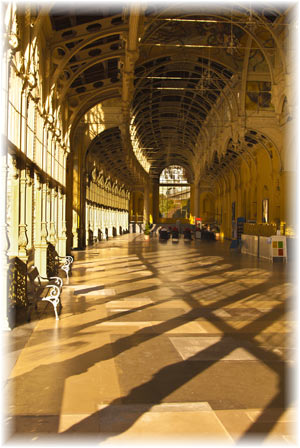 Hlavní finishes at the Pacifik Hotel and, on the right-hand side, are the spas, a good quantity of which are being renovated. The heart of these spas, the curved ‘Kolonádas’ (or Colonnades) were constructed, in 1889, from wrought iron. Like a Victorian railway station or a greenhouse, they are buildings of great enchantment. Those who went to cure their ailments at the varied springs housed by the colonnades could additionally visit the coffee houses and pastry shops throughout Hlavní. The colonnade’s springs contain different chemical components, and the spa’s medical practitioners advocate doses solely from the specific springs which will correctly treat a particular ailment. The south end of the Kolonáda is home to the Singing Fountain, whose spume and jets are choreographed to classical music every 2 hours to interest the passers-by. Travelling further south of the fountain, you encounter a casino, where discos provide entertainment for the younger tourists.

In Goethovo náměstí, to the rear of the colonnades, is the ‘Municipal’ Museum housed inside a building that used to be occupied by Goethe. The slogans are only written in Czech, but there’s an English language tutorial on video which provides a comprehensive historical summary of this town. Close-by is an additional residence of Goethe: what used to be the Weimar Hotel. This was the 1st choice for nineteenth-century celebrities. The intriguing, octagon-shaped, neo-Byzantine ‘Church of the Assumption of Our Lady’, constructed in 1848, and as distinctive as any of the spa’s other features, looks onto the hotel from over the Goethovo square. As in every Bohemian spa, the ambience is quite formal: Smoking outside, dogs and cycling are all forbidden.

Spa towns, usually, aren’t disposed to gastronomic indulgence, but Marienbad is renown for its’ oplatky wafers, which are plentiful in supply. These simple cookies are offered in an array of flavours. They’re normally consumed without anything else to counteract the powerful flavours of the water from the springs.

Another attraction in Mariánské Lázně is how easy it is to trek into the pine forests around town, straight from the gardens of the spas. An eighteen-hole golf course and the lavish adjacent Park Hotel Golf occupy the area over the town. The golf course is among the top courses in the Czech Rep. A cable car running from May-September links the Hotel Krakonoš with the Hotel Koliba, a great starting point for trekking through the forests on specified routes.

Certainly, hiking is the main benefit of going to a spa, particularly for people who’ve got no desire to sample the water or undergo treatment. At 1896 ft (578 metres), the quality of the air up there is good and fresh. Miles of hiking and walking routes were drawn up in the nineteenth century, lots of them pointing to the springs that were more remote.

To maintain the untouched look of the small town, cars were not allowed in its’ centre. There is, though, plenty of parking a quick walk away from the spa. 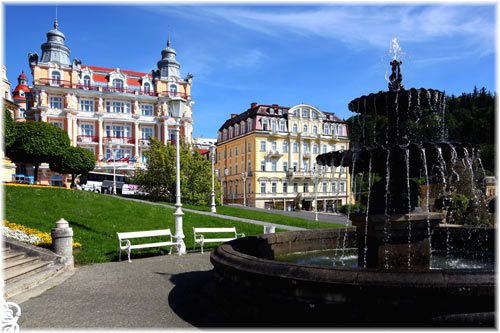