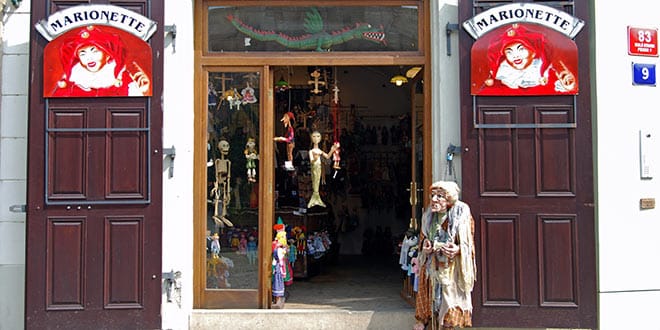 The Czechs have found themselves under foreign rule for a massive majority of their existence. Because of this, marionettes have become an important way to satirise the rulers of their country in relative safety, allowing them to keep their heads and steer clear of political persecution!

The Bohemian craftsmen of the Baroque era really perfected the art of marionette making, otherwise known as puppet making. They were heralded for being able to produce marionettes with fantastic features and their mastery of movement and effects in the shows. Puppetry has, of course, developed since then, though, with the shows now having elements of fantasy, humour and music incorporated into them. The most famous contemporary institution for marionettes is the National Marionette Theatre in Prague.

Marionettes come in many different forms. They can be built using various materials, such as plastic, wood and plaster, but if you are going to buy a puppet on the streets of Prague, make sure you don’t buy a low-quality replica of the better models. If you want to buy a marionette made with real craftsmanship, head to see Pavel and Karolina Truhlář in the Lesser Quarter. They also hold workshops showing how real marionettes are made, all for about 1,500 CZK per person. Don’t worry; you don’t need any experience: all of the components are provided, and they will be there to guide you along the way. If you don’t have time for the workshop, buy a “do it yourself” marionette from them instead.

The Kampa Amateur is perhaps the best-known puppet theatre in Prague, and Truhlář also set this up in the early 1990s. They perform in many different cafes and pubs, and every tourist should try to catch a performance. Some of the most heralded are the shows entitled “The Sailors,” “The Musicians,” and “The 13 Clocks.” To find out more, visit the website at www.marionety.com.

If you find yourself travelling outside of Prague and end up in Chrudim, there is also a museum and festival of puppetry here. Most other places in the Czech Republic also have their own puppet theatres too.