Metro Lines Can in Future Lead to Petrovice, Modřany and Žižkov 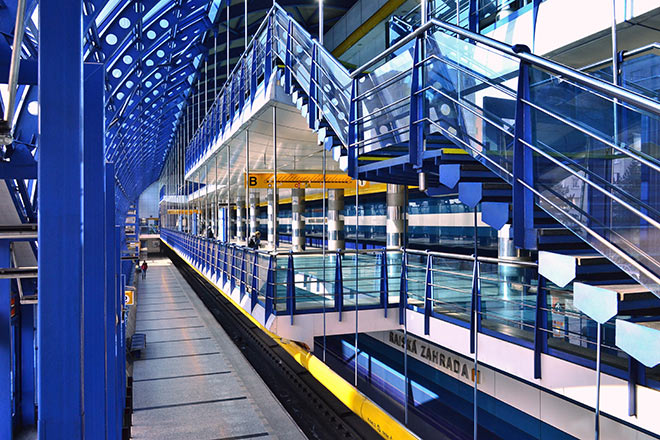 The individual proposals first and foremost undergo a complex examination of how much their creation would relieve the surface transport and whether the multi-billion investment would ever pay off.

“We will not wait for metro D to be finished. The Institute for Planning and Development of Prague (IPR) will be preparing studies in parallel to show what real possibilities exist. Possible future metro routes will be included in the forthcoming Metropolitan Plan,” says Deputy Mayor for Transport, Petr Dolínek (ČSSD).

The last time the Metro network was expanded was in 2015, by a stretch between Dejvická and Motol Hospital. The plan to connect to the airport was abandoned due to the upcoming capacitive railroad, which should be crossing the road from the center of the metropolis to Kladno.

Where to Extend the Metro?

Train connections are being prepared by the state, but due to the track problems, they have been postponed for a long time. That is why the capital began to resurrect the metro plan for the airport, which is also included in the current territorial plan.

However, the State Enterprise of Railway Infrastructure Administration (SŽDC) has in the past few months moved forward with preparations and is now asking for territorial decisions for some sections. That’s why it does not appear that the construction of the metro in this direction will be realistic in the coming years, and it is rather a backup solution in case the railway project stops.

On the green line A, there is a future variant, that the new stations will be at the opposite end of Depo Hostivař, due to the ever-growing development area on the south-eastern outskirts of the city. At the same time, the original vision planned that the metro would be dug up from the final metro C station Haje. “However, this line is already overloaded today. That is why we are considering a second option, which is the management through Hostivař, Horní Měcholupy to Petrovice,” suggest Dolínek.

A similarly ambitious plan has already existed for many years in the case of Route B. The extension from Černý Most to Horní Počernice is, however, now rather utopian. On the other hand, development on the other side is more likely. “Extension of the metro from Zličín to one depot station in Zličín is due to the construction of a new P+R parking site,” says IPR spokesman, Marek Vácha.

To Čakovice for 16 bilion

The city is also seriously concerned with the introduction of the metro from the current C-terminal station in Letňany to Čakovice. It justifies the project with better transport service for the current inhabitants of the surrounding settlements, planned development projects for thousands of people and easier options for out-of-Prague citizens to park the car on their way to the capital.

In this case, Metroprojekt company has already established an initial study at the turn of the year. The total cost is estimated at CZK 16 billion, but the preparation and construction of the new section would take twelve years. The preferred route is 3.5 kilometers long and includes three new stations. The first one is located in the middle of the Letňany housing estate, another is to be located in one of the development areas, and the arc would then follow the route to the new terminal station of Čakovice railway station, where a transport node can be established with a continuous link to the railway transport. In addition, the city would build an out-of-city parking lot.

Among the loudest proponents of the construction of the new section are, of course, the Town Hall in Čakovice. “The metro is necessary; without it, the development will be very demanding in the whole area,” says Mayor Alexander Lochman (Pro Prahu), and adds that the city district calls for a territorial reserve to be created for this line in the forthcoming Metropolitan Plan.

D-line to the Republic Square

The basic axis of the planned Metro D line connects Depo Písnici with Pankrác and, in the next phase, also connects Náměstí Míru station. But that would not end the blue line. From Vinohrady, it could go further north through Žižkov to Vysočany. This spring, IPR began working on a change in the land-use plan to allow it. There is also a variation with the turn to the Square of Republic.

In the southern part, a newly planned station, Nové Dvory, can be built from where the new branch of the metro would lead towards the west. It should only happen after the completion of the main route in the ten-year horizon. The intention is now to be implemented in the Metropolitan Plan of the City Hall of Prague 12, and it is also supported by the City Council. “We are asking for a new branch of Metro D from the Nové Dvory to Sofijské náměstí in Modřany,” says architect of the Prague 12 City Hall, Michal Pajskr.