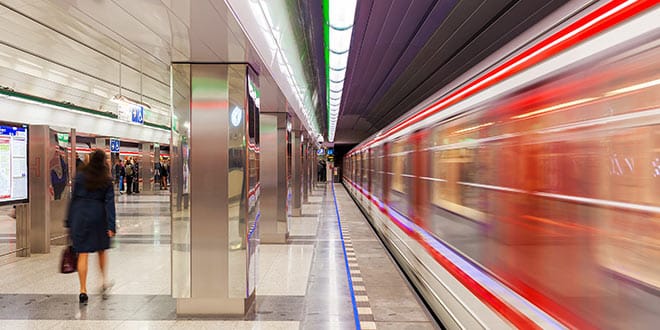 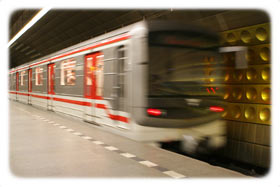 The Prague Metro is an underground public transportation network. It is the fastest means of transportation around the city and serves about 1.5 million passengers a day, making it the sixth busiest metro system in Europe. Prague metro was first opened in 1974. It is fast, efficient and straightforward to use (all directions are well signposted even for those unfamiliar with the local language). Its three lines A, B and C consist of nearly 60 km of tracks running mainly underground. Metro entrances are not always easy to spot. Look for a sign displaying the ‘M’ within an upside-down triangle. When leaving a station, head for a sign saying vystup (exit); for a transfer line, look for prestup (transfer). Lines are identified by a letter and colour: A (green), B (yellow) and C (red).

Once you have purchased your ticket and passed through the unmanned ticket barriers, continue down the fast-moving escalators to the trains. At the bottom of each escalator is a long central corridor with a platform on either side for trains travelling in either direction. Signs suspended from the ceiling indicate the direction of the trains. The edges of the platforms are marked with a white, broken line that should not be crossed until the train stops. Most of the metro doors open and close automatically, giving a recorded message when they are about to close. During the journey, the name of the next station is announced in Czech. 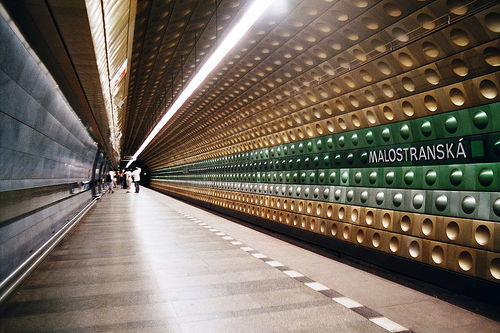 Line A is useful for tourists because it covers all the major areas of the city centre — Prague Castle, the Lesser Town, the Old Town and the New Town — and the main shopping area around Wenceslas Square.

The metro operates from 05.00 until midnight. Trains run every 2 to 3 minutes during peak hours and every 5 to 10 minutes during weekends and off-peak hours.
Disabled travellers should note that the barrier-free access to platforms is more a feature of suburban metro stations than inner-city ones. In the city centre stations, Muzeum, Vysehrad and Hlavni Nadrazi (Main Train Station) are wheelchair-friendly.

The metro is run by the Prague Public Transit Company (Dopravní podnik Praha), which manages all means of public transport around the city (the metro, tramways, buses, the funicular to Petřín Hill and the chairlift inside Prague Zoo). Since 1993, this system has been connected to commuter trains and buses and Park&Ride car parks. Together they form a public transportation network reaching further from the city, called Prague Integrated Transport. While the larger system is priced by zones, the metro is fully inside the central zone. 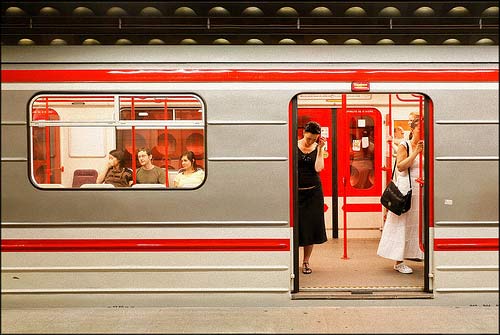 Many of Prague’s metro stations are quite large, with several entrances spaced relatively far apart. This can often confuse tourists, especially at the central hubs such as Mustek or Muzeum: it is not enough to get off at the right station; you must also choose the right way out to ground level. Otherwise, you can easily find yourself five or ten minutes walking distance from your destination. Most of the metro is underground, so unlike Paris or Berlin, there are no opportunities for sightseeing from the metro.

Maps of the underground system can be found above each metro door.