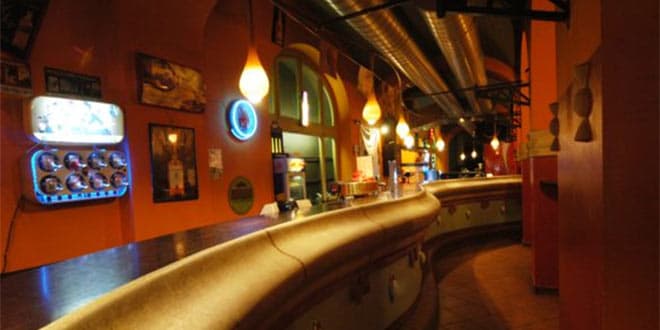 Futurum is a remade community centre with a formal exterior that belies the hip and groovy space within. In the communist era of dictatorship, it turned into an underground big-beat club. Rock’n’roll bands played there till the 60s. Futurum was later closed, but the tradition of rock concerts survived till the Velvet Revolution of 1989. It was hard to host rock concerts in communist times. The big beat was nearly prohibited because of the actions of many treasonous people, like in the well-known band Plastic People of the Universe. In the 90s, The Futurum supported new bands, and it was reconstructed in 1999. Nowadays, the club interior is more techno-oriented, with flashy lighting and exposed brick and metal.

Futurum is quite a large club, having a capacity for 500 people, with a large bar occupying the longest wall next to the dance floor. On the other side behind the huge pillars are futuristic lighting tables and in the first part of the club is a chillout room. The club is air-conditioned, which you will appreciate especially when there is a concert.

It is primarily a rock club, and because of its size, it is a venue for large bands to play – large in the fame, of course, not a band with a giant drummer and yeti guitarist – to fill the large dance hall.
There are the 80s and 90s parties every Friday and Saturday, specialising in showing old video clips on a large screen.

Friday nights tend to draw large crowds of hipsters, ready to dance to the 80s and 90s, dance beats and meet new people.