National Memorial to the Victims of Heydrich Terror In 1942 seven Czech paratroopers involved in the assassination of Reichs-protector Reinhardt Heydrich hid in the crypt of the Church of St Cyril and Methodius for three weeks after the killing, until their hiding place was betrayed by the Czech traitor Čurda. The Germans besieged the church, first attempting to smoke the paratroopers out and then flooding the church with fire hoses. Three paratroopers were killed in the ensuing fight; the other four took their own lives rather than surrender to the Germans. The crypt now houses a moving memorial to the men, with an exhibit and video about Nazi persecution of the Czechs. In the crypt itself, you can still see the bullet marks and shrapnel scars on the walls and signs of the paratroopers’ last desperate efforts to dig an escape tunnel to the sewer under the street. On the Resslova side of the church, you can see narrow gaps in the crypt wall, which is pitted with bullet marks. 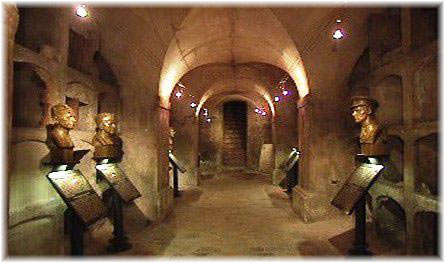