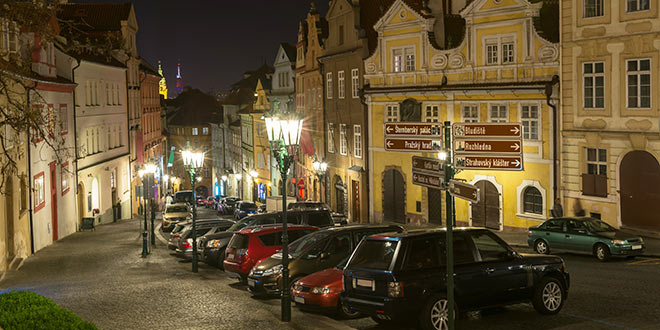 If you head west of Lesser Quarter Square to Prague Castle, you will pass through beautiful picturesque Nerudova Street named after Jan Neruda. He was a famous Czech poet who lived at the house called ‘At the Two Suns’ (which is no.47). All the houses in Prague used to be marked by house signs until 1770, when the new way of numbering was introduced. The houses in Nerudova Street bear an extraordinary selection of heraldic beasts and house signs. Climbing up this steep street, you will notice The Red Eagle, The Golden Horseshoe, The Green Lobster or The White Swan. Many houses are now used as coffee houses, wine bars and pubs. Several large Baroque palaces are also situated in this street, for example, Thun Palace (the seat of the Italian Embassy) and Morzin Palace (the Romanian Embassy). The facade of Morzin Palace is decorated with two huge statues of Moors holding around the balcony. Another impressive facade belongs to the Theatine Church of Our Lady. The Order of Theatines was founded during counter-reformation times.

Most buildings have two street numbers shown on modern art nouveau-styled enamelled signs: the red sign is the district number; the blue sign the street number. The red district signs also show the street name and the district name and number. In Czech, the street number is written after the street name. Historic street signs can also be seen in older neighbourhoods. Some 19th-century Gothic-script Czech/German signs have recently been uncovered, while some houses have baroque-era, stucco-relief signs with drawings of the house’s name: probably the best example is the three fiddles gracing the house of a family of violin-makers, At the Three Little Fiddles in Nerudova 12/210 in Lesser Town. 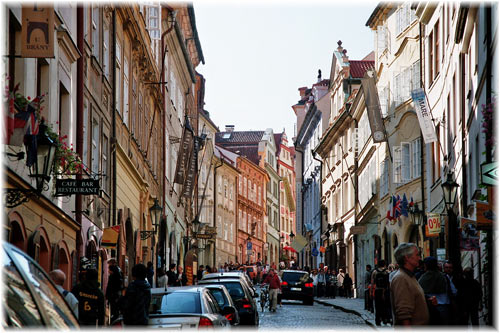