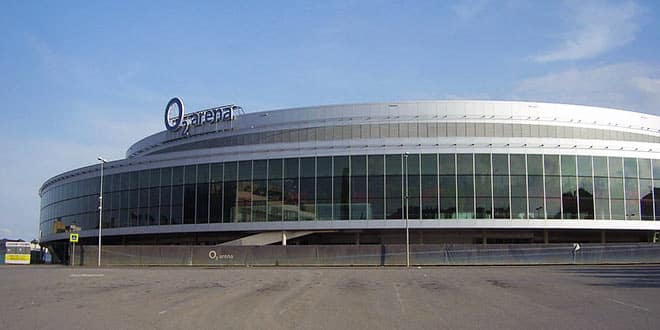 The O2 Arena in Prague is one of Europe’s most modern multi-functional arenas and is also home to the Czech Extraliga team HC Slavia Praha. Tickets when HC Slavia play cost from 150 CZK and up. There are three games a week throughout the season, from September to May, so you should be able to catch a game.

It is Prague’s main venue for all kinds of sports, culture, entertainment, exhibitions, fairs and other events. The idea of building such a huge magnificent arena came after a golden era of ice hockey when Czech teams won four gold medals in a row. The arena was formerly known as Sazka Arena and was renamed in March 2008. 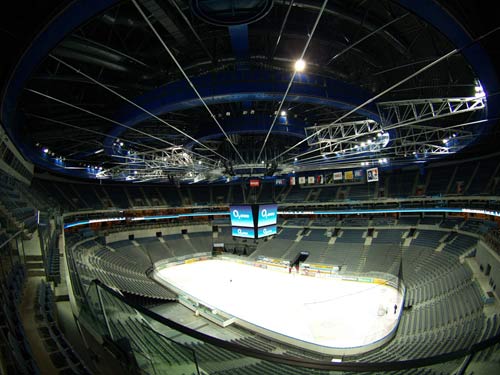 Facilities include a huge video cube, a closed-circuit TV system, display panels and state-of-the-art acoustics, with hi-tech illumination.
There are extensive shopping areas with comprehensive facilities and various bars and restaurants, and prestigious areas for press conferences, workshops, and congresses.

The Universal Hall was built for smaller and more commercial events. The total capacity of the Universal Hall, connected to the neighbouring arena by a pedestrian corridor, is about 2,300 seats.
The Universal Hall is used for film and theatre performances, discotheques, balls, dance shows, sports races, concerts, meetings, conferences and congresses, fashion shows, TV programmes, gala evenings, banquets, exhibitions and fairs.

The original idea was to build the Arena in time to host the 2003 World Ice Hockey Championship. But due to problems with investors and surprisingly with distrust of the government, it was finished a year later, in 2004. Because of that, the Czech ice hockey governing body had to switch that tournament to Finland. The Arena’s main backer then became Sazka (a Czech betting company), but at present, it is 02 (the mobile company). Many criticised the whole idea, especially various media parts, but most critics had changed their minds and praised it when it was finished.

Future of the Arena

O2 Arena should be enhanced in the future by the Green Island multipurpose centre comprising an international hotel, congress centre, shopping and office areas, including a multi-storey car park and extensive public park.

The Arena is easily accessible by private car as well as by public transport. Ceskomoravska Metro, a bus terminal, tram stop and a railway station are just a few minutes walk from the arena. Address: Ocelarska 2, Prague 9, website.