Police and Safety in Prague 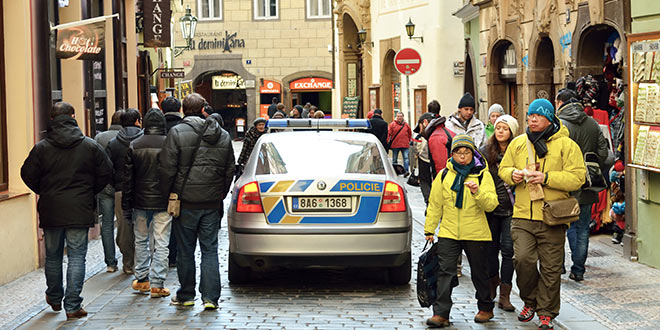 Is Prague a Safe City to Visit?

Prague is a comparatively safe city; crimes of violence are very seldom.  Prague is not more dangerous than any other European City. Statistically, you are more likely to be robbed in a North American city than in Prague. Don’t be paranoid and look after your belongings.

You should be cautious when travelling on night trains (thieves love overnight trains), changing money (employees charging rip-off commissions), dealing with dishonest taxis, paying in restaurants and walking around through seedy local neighbourhoods.

When travelling, it is useful to keep a photocopy of your passport and a note of your credit card number. This way, if you are unlucky enough to lose or have these items stolen, you will be able to get replacement travel documents and access to your money. According to Czech law, you should have with you proof of identification at all times. In reality, police very rarely ask people for identification. If you been robbed or are the victim of any crime, you should immediately report it to the police. Most police attendants won’t speak English, but they should contact an interpreter. Usually, you will need a police report to claim insurance.

You may be shocked that Czechs have prejudice against the Roma population, whom people are quick to blame for the city’s problems. However, racism towards visitors is rare, though there have been some assaults by skinheads on dark-skinned people.

Walking alone on the street is generally safe, even for a solo woman. Just try to avoid the area around the intersection of Wenceslas Square and Na Příkopě after dark, unless you like a red-light district. Prague has developed a burgeoning sex industry, with strip clubs, lap dancing clubs and brothels. Many street prostitutes gather here at night too. Quite often, you can see here many British stag parties stumbling drunkenly through those streets.

150 – Fire Fighters
155 – Medical Emergency
156 – City Police
158 – Police
On these Numbers, operators speak mostly the Czech language only – better to ask anybody to explain your problem instead of you than to call directly.
112 – Unified European Emergency Call (operator speaks Czech, English, German)

Watch Out for Pickpockets

Pickpockets in Prague are very skilful. They usually act in a group and target trams, metros and other crowded places. Be particularly careful on trams 14, 17, 22 and 23. They are more frequent during public holidays and the Christmas season.

Another thing you should be careful about are taxi drivers, as overcharging is quite phenomenal (worst in EU).  Never take a taxi off the street. From Airport you can pre-book a safe taxi in advance.

When eating in restaurants, you should check your bill, as many restaurants try wrongly counting it (but this is now getting better, only in cheaper places this could be happening).

You should keep copies of your insurance policy, the European Health Insurance Card (EHIC), in a safe place.

There is no other health threat when travelling to Prague. Suppose you need drugs to go to Pharmacies (lékárna), the only places to sell over-the-counter medicines. They also dispense many drugs normally available only by prescription.

State police in the Czech Republic are responsible for day-to-day policing. They wear white shirts and dark-grey trousers or skirts (always armed). Municipal police wear light-grey trousers or skirts. Traffic police are responsible for all road and traffic regulations. They may check your documents; for that reason, always carry your driver’s licence and passport as well as your car documents. This police force also controls fines for parking and clamping infringements. If you are involved in a traffic accident, you must inform the police before moving your vehicle.

After 10 pm, some tourist areas are lined with callgirls happy to see you. Although prostitution is illegal, the local police turn a blind eye. Do not pick up any girls from the streets, especially if they are not Czechs. It can be very dangerous. You could end up without any money and maybe with some disease.

Despite all this frightening information, the crime in Prague is no worse than in any other big city.