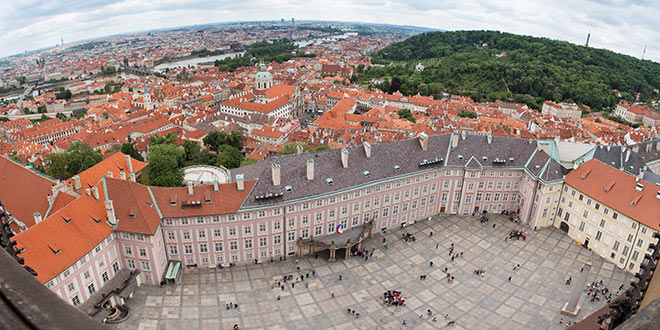 Visitors enter the first courtyard through a nice Baroque gate guarded by two giant statues, created by Ignác František Platzer and dating from 1769. For centuries a moat divided the castle from Hradčanské Square, where the gate now stands, and the castle could only be accessed across a drawbridge. This natural ditch was one of the three moats that originally protected the castle. The other two were human-made and encircled the other courtyards. The first courtyard is closed in by palace buildings, which Empress Maria Theresa had constructed. Building work on this Rococo court was taken on by the Viennese architect Nicollo Pacassi. It was decided to preserve the Matthias Gate, one of the first Baroque structures in Prague and the original entrance to the castle, erected in 1614 by Giovanni Mario Fillipi. In front of the gate stand two huge flagpoles made of several pine tree trunks. From the passageway between the first and the second courtyard, a staircase leads up into the representative rooms of the castle. These are now used by the Czech president Vaclav Klaus as audience chambers. The staircase to the left leads up to the Spanish Hall.

Like the first courtyard, the current appearance of the second courtyard is the work of Maria Theresa’s court architect Niccola Pacassi. This courtyard was initially created in the 16th century on the site of the second moat. Most of the northern section of the courtyard was built during the reign of Emperor Rudolf II. Initially, stables on the ground floor were created, and several years later, the Imperial Palace was added on the opposite side. Rudolf II was a great lover of the arts, and he earmarked many of the castle’s rooms to house his collections. Soon these rooms were bursting at the seams, so he decided to add another floor above the stables and store a part of his collections there. On the first floor, he had another two grand Renaissance halls built – the Spanish Hall and the Gallery. The Prague Castle Picture Gallery, which now houses a fraction of Rudolf II’s famous collections, is situated in what used to be the stables. During reconstruction work carried out on the stables, the remains of the first church at Prague Castle dedicated to the Virgin Mary were discovered. Built in the 9th century, this was only the second Catholic Church to be established in the Czech lands.

Passing through a passageway in the east wing, you reach the third courtyard, around which are grouped the oldest parts of the castle complex. Even here, buildings from various periods were united behind one façade by Pacassi. The entire courtyard was paved in the 1920s, under which the remains of the original medieval structures can be found, such as a small 12th-century church and graveyard. The most significant building in the courtyard is the largest Christian place of worship in Prague, the Cathedral of St Vitus, containing the tombs of Czech kings and the crown jewels. 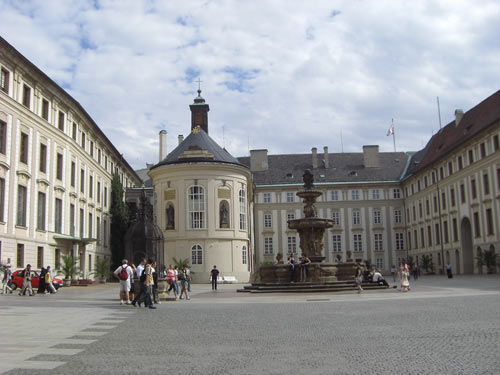