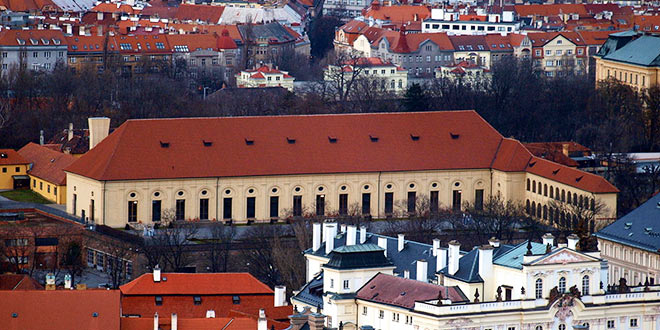 Prague Castle Riding School is a dipteral building by the U Prazskeho Mostu Street, which goes to the Northern gate of Prague Castle. At the end of the 17th century, it was built in Baroque style by the constructionist Jakub Antonin Canevall. The author of the design is the architect Jean Baptiste Mathey. The entrance is decorated with a stucco relief of jumping horses, weapons and busts of a Turk and a North African. The Riding School was adapted to become an exhibition hall in 1948-59 according to the project of architect Pavel Janak.

Another of Janak’s assignments was the professional reconstruction of a rusty object after the war. In the place of the former Summer Riding School, he developed the so-called Janak’s giardinetto – situated on the terrace of the garages, which Professor Janak also created.

Janak, however, didn’t make everything he intended; above all, he failed to pull down the inbuilt western part of the Riding School made by the Nazis. This was also in bad shape and did not satisfy the demanding standards for presenting valuable exhibits. That is maybe why it was sometimes used as a concert hall as Janak intended because it has excellent acoustics. That, eventually, became a tradition.

The creator of the contemporary Riding School is Professor Ladislav Labus, who first pulled down the war part and gave the hall its original proportions; of course, the built-in windows were renewed. The basement was turned into a place for exhibitions and concerts, with the addition of a new elevator etc.

The entire space was cleansed of fancy additions; the new design is simple and effective, and it is stylishly differentiated from the baroque constructions. In the narrow wing is a café and a bookshop on the ground floor; in the main one, there is the gallery and the concert hall. The early baroque site was newly adapted, and it is ready to serve its function well.

Great windows lead onto the Riding School terrace. Its roof was modified into a garden, where an interesting and unusual view of St. Vitus cathedral and the North fortification wall of Prague Castle is revealed.

Opening times: Dependent upon the exhibition 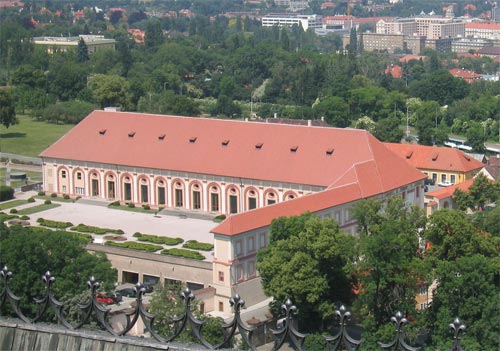