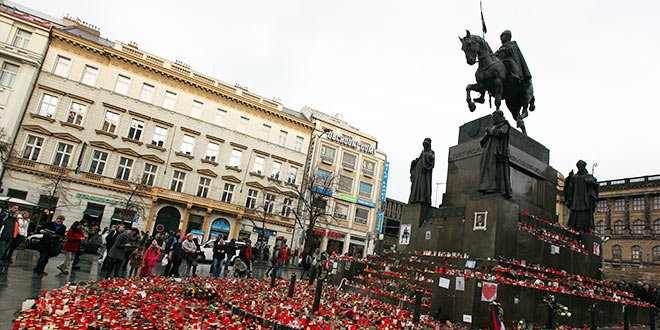 There is always something happening all year round. For most events, you can buy tickets online or at Prague’s numerous tickets agents and very often, tickets are also available at the door.

Date: 5 December. This is mostly celebrated in the city centre. People wander around the streets in threesomes, dressed as St. Nicholas, an angel and a devil, symbolising confession, reward and punishment. On this day, grown men stick to the hobby of beer drinking. (Read more)

Since 1995, this classical music festival is held in Prague. The main attraction is the musical performances by famous Czech composers. website

Held from the first Advent weekend in Prague, this festival features a variety of Advent and Christmas music concerts. webiste

During December, a giant Christmas tree lights up the centre of the square, while the space around it is crammed with market stalls selling carved toys, ceramics, glass figurines, Christmas gifts, delicious gingerbread cakes, barbecued sausages, and mulled wine. Street performers provide entertainment. Even if you are not there to go shopping, you can enjoy watching street performers and indulging in the Christmas atmosphere.

On 31 December, head for spectacular fireworks and a mellower pace at Prague Castle or Vyšehrad. For great festivities, go to Old Town Square where live big screening and other performances are held. Other places to go are Wenceslas Square, and Old Town and New Town. Be prepared for streets packed with crowds of tourists and champagne bottles smashed everywhere.

For all Literati lovers come to hear the reading of extracts and hobnob. It is your chance to see Czech literal idols. www.pwf.pragonet.cz (Read more)

On 19 January, the country marks the day in 1969 when a very young university student, Jan Palach, died after setting fire to himself on Wenceslas Square to protest about the invasion by Warsaw Pact troops the previous August subsequent Soviet occupation of former Czechoslovakia.

Date: 26 February to 8 March. You will see costumes and street parades in the heart of the city centre. Prague’s Bohemian Carnival offers a great programme of events for both children and adults. (Read more) website

This takes place at the beginning of March. www.oneworld.cz (Read more)

A series of classical and contemporary concerts are performed in venues all over the city throughout March.

is a more subdued version of the Irish St. Patrick’s Day and is celebrated around the same time in March every year. (Read more)

Starting at the end of March, an independent film festival features more than 500 movies. Many are movies with English subtitles. www.febiofest.cz (Read more)

Date: 30 April. This festival marks the end of winter and the new birth of spring. Bonfires are lit to purge the winter spirits. These festivals are mostly found in the countryside but can be seen at Petřín Hill in Prague as well. (Read more)

Starting at the end of April, hundreds of exhibitors from 26 different countries will show off the latest in great literature. Book World Prague is at the Industrial Palace, Prague Exhibition Grounds. www.bookworld.cz

Date: May. The route runs throughout the city. Join the other runners from all around the world. After the run finish, be prepared for a great street party. The whole race is 42km (26 miles), but you can take the shorter option of the 10km (6 miles) race or even the family fun run, a 2km walk for health. For the full marathon run, you have to pay a registration fee of 300 to 600 CZK. (Read more) website

Date: 12 May-3 June. This is a famous series of classical music and dance performances in churches, palaces and concert halls, drawing thousands of visitors every year. Enjoy a first-class symphony, opera and chamber music from talented artists. The celebrations begin with a procession from Smetana’s grave in Vyšehrad to his namesake concert hall in Municipal House. www.festival.cz

At the end of May, you can visit the international festival of gipsy culture, an exuberant demonstration of Romany culture from around the world. The festival features concerts, seminars and workshops. www.khamoro.cz (Read more)

A fringe theatre festival takes place in various parts of the city. Most of the time, the performances are in English. www.praguefringe.com

In late May, the tattoo fair takes place on a weekend at the SK Slavia Praha complex at Strahov. website

The Marionette theatre festival takes place all over Prague in the month of May.  www.puppetart.com

A theatre and music festival at the Bohnice psychiatric facility usually taking place over a weekend in late May. www.meziploty.cz

It is the largest gastronomic event in the Czech Republic calls attention to the wondrous varieties of Czech Beer in late May. website

Date: 3 June. Honour the memory of one of Prague’s great writers on the anniversary of Franz Kafka’s death, when admirers from around the world visit the artist’s resting place to pay respects. The venue is the New Jewish Cemetery.

There are various venues across the city throughout June. Expect beers stands and concerts at the Vltava riverfront. www.unitedislands.cz (Read more)

There is a large celebration of folk music and Czech culture and heritage in various towns across the Czech Republic throughout the summer.

In June, you should not miss the international festival of contemporary dance and movement theatre. Now, this festival is one of the most successful in Prague. www.tanecpraha.cz (Read more)

From June to September, there are Shakespeare performances at Prague Castle Complex. www.shakespeare.cz

This world music weekend is held at various venues across the city in June, including the Akropolis and Štvanice island. website

Festival for organ lovers, held annually in Prague, presenting a series of organ concerts by well-known organ virtuosos from all over the world. The venue where the concerts are held in the stunning baroque St. James Basilica right beside Prague’s Old Town square. (July-August) website

This is held at Collegium Marianum throughout June. It is quite popular and also attracts some of the best performers around. www.collegiummarianum.cz

Celebrations are held on 6 July to commemorate 1415 burning at the stake of Bohemian religious reformer Jan Hus. It kicks off with low-key gatherings and bell-ringing at Bethlehem Chapel the evening before.

Large festival of chamber music held at a variety of Prague concert halls throughout July and August. website

In late August, come to see this 10-day festival featuring Italian operas at the State Opera House. The festival provides a chance to see outstanding productions outside the main opera season.

This is held from September to November. Visit this festival of classical music. www.strunypodzimu.cz (Read more)

31st of October — If you are interested in an unusual, slightly terrifying Halloween holiday, Old Prague is the place. Its mysterious, winding alleys are full of ghosts and macabre legends. Jack-o-Lanterns and gruesome monsters grin from every shop window, and phantoms are welcomed in every nightclub and disco.

In late September, you can visit the annual celebration of the country’s first grape harvest. There is traditional music and crafts along with plenty of young wine.

This commences in the last week in October (this week-long festival has a tradition of more than 30 years). If you like jazz, this festival should not be missed especially as you can see performances by jazz legends from all around the world, with plenty of local stars in between. The festival is held in several venues across Prague but mostly at Lucerna Music Bar. www.jazzfestivalpraha.cz (Read more)

Anniversary of the Velvet Revolution

17 November is a day that changed the lives of Czechs. A commemoration and wreath-laying ceremony are conducted on Wenceslas Square.