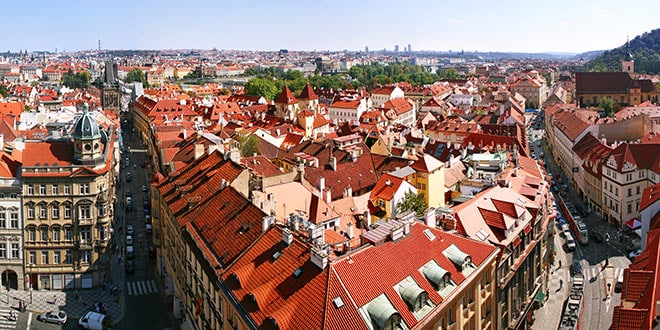 Prague Castle is the most popular sight visited in Prague. It is the largest ancient castle in the world (570 m long, on average 128 m wide, area 7.28 hectares). Constructed in the 9th century by Prince Borivoj, the castle transformed itself from a wooden fortress surrounded by earthen bulwarks to today’s imposing form. Rulers made their own additions, so there is a mixture of styles. Prague castle has had four major reconstructions, but it keeps its classical facelift it took on in the 18 century during the reign of Maria Theresa. The castle has three courtyards, and it has always been the seat of Czech rulers and the official residence. Allow at least half a day if you want to explore it in depth.

Mala Stran (Lesser Town) was originally a settlement around the castle and later grew into an imposing quarter of splendid Baroque palaces, churches and gardens. Its centre is Malostranske namesti (Lesser Town Square).

The historical nucleus of the right-bank part of Prague is Stare Mesto (Old Town). Its narrow and sinuous streets still evoke a medieval atmosphere. The Old Town streets lead to Staromestske Namesti (Old Town Square), with many remarkable historical buildings and the world-famous Astronomical Clock.

The neighbouring quarter, Josefov, is an area of Jewish monuments of European significance: the Old Jewish Cemetery and the Old-New Synagogue. Exploring the walk, which is dedicated to the former Prague Jewish ghetto, takes 4 hours. Josefov is the name of Prague’s former Jewish Town, established as an independent fifth district within the territory of the Old Town of Prague following the emancipation of the Jewish population after 1850. It was named after Joseph II, under whom Prague’s Jews were at last granted some civil rights. The former ghetto used to be one of the poorest parts of the city, and a large part of it was demolished at the turn of the 19th century. The only preserved structures are the synagogues, the town hall and the old Jewish cemetery. They survived through World War II simply because Hitler had wanted to set up in Prague a museum of the “former” Jewish nation.

was built in the 14th century southwest of Stare Mesto, with Vaclavske namesti (Wenceslas Square) in its centre. It is the fourth and last of Prague’s towns which closed the medieval development of Prague. The tour of New Town takes a whole day, with half a day dedicated to the town itself and 2-3 hours to inspect Vyšehrad.