Prague Is Fighting Against Unfavorable Currency Exchange Offices. A Police Officer Warns Tourists About One of Them 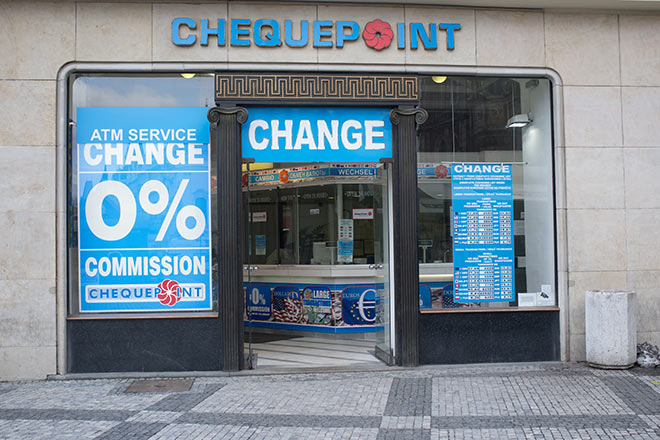 Taxis and exchange offices. Two services foreigners only rarely find kind words about after they return from a holiday in Prague. But while taxis are ripping customers off illegally, the exchange offices are offering unfavourable exchange rates or a high fee totally legally. On Wednesday, two Prague female police officers warned a few visiting tourists about the practices of the local exchange offices.

The Chequepoint currency exchange office on Old Town Square is one of those with the worst reputation. Here, you can get just 15 crowns for a Euro, even though the exchange rate of the Czech National Bank is 26 crowns.

But ripped-off tourists can do little to get their money back. Exchange offices can legally adjust their own exchange rates. This doesn’t really benefit the good reputation of the Czech Republic in general and Prague in particular.

So this is the reason why even the city police force stepped in to discourage tourists from using the exchange office. The police warned the tourists and explained to them that they’d get just 15 crowns for 1 Euro, stated Janek Rubeš, a reporter who has dealt with Prague’s exchange offices for some time and who gave the policewomen credit on Twitter.

On Thursday, the police were nowhere to be seen, and tourists happily gave away their money to the exchange office.

It seems that this solution isn’t permanent. “It’s a question of the number of active personnel; we can’t send out our people just for this reason,” stated the city councillor, Libor Hadrava. According to him, the information regarding the exchange offices is provided to tourists daily.

Even though tourists can’t count on the police to guard unfavourable exchange offices every day, Prague is preparing some long-term measures to help the current situation.

The leader of Prague’s Pirate Party, Jakub Michálek, presented a draft of an amendment to the Act on Exchange Offices to Prague’s Mayor, Adriana Krnáčová, that would allow Prague and other towns to ban extremely unfavourable exchange rates.

Prague could thus implement a law that wouldn’t allow the exchange offices in the centre of the city to deviate from the Czech National Bank’s exchange rate of the EUR and USD by more than 10%, explains Michálek, who also adds that this shouldn’t be a problem, since most of the exchanges would already be compliant with this law today. “Tourists are getting ripped off only by a small number of exchange offices,” adds Michálek.

The proposal for a bill amendment will be debated within the next fortnight. Prague is also preparing an information campaign that should make tourists more aware of the scammers, and that should also review whether or not any of these scammers operate in buildings owned by the city.

Two Hours to Think It Over

In parallel with Michalek’s proposal, the Czech National Bank is also preparing its own amendment to the Exchange Offices Act. A tourist could withdraw from the contract within two hours in case he finds he exchanged the money unfavourably.

This amendment would also require the exchange offices to have a single exchange rate card. Many of them use two: one for normal clients and a second one for clients wishing to exchange a bigger amount of money. If no problems arise, this amendment should be passed at the beginning of 2019.

Share
Facebook
Twitter
Pinterest
Email
Print
Previous articlePick-Pockets in Prague
Next articlePrague’s Astronomical Clock Will Vanish From the Old Town Square at the Beginning of 2018 for Half a Year, Because of Repairs
RELATED ARTICLES
News