DISCOVER PRAGUE!
HomeNewsPrague Like Other EU Cities Is Paralysed by Heavy Snowing
News

Prague Like Other EU Cities Is Paralysed by Heavy Snowing 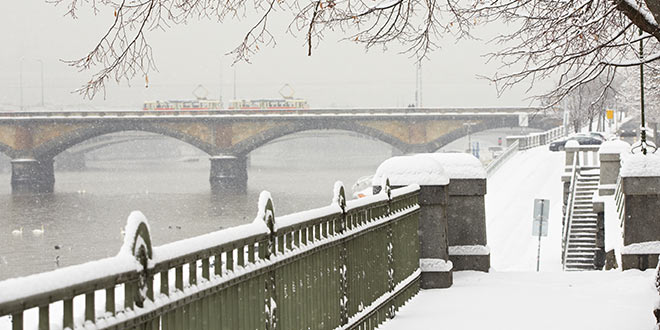 Prague is covered with a several-centimetre layer of snow. On the evening of 1st December, Prague airport was closed due to the heavy snow. Early morning on the 2nd December, the service was back to normal. Today it is expected that snowing will ease, but for tomorrow there is a probability of another heavy snow strike. Traffic in the whole city is causing problems, as vehicles are moving very slowly and some roads are being closed or diverted. Also, some public bus and tram lines are not operating due to severe weather conditions. For this reason, you should allow at least two or three times longer than normal if you plan to travel by car or taxi in the city centre. Also, on many roads outside the city, there have been reports of accidents and low visibility.

The weather during this Weekend (4th and 5th Dec)

After the heavy snow that hit the Czech Republic on Thursday night, temperatures will fall even more. During the weekend, the temperature will drop to minus 13, and in some places, the mercury may even drop to minus 20 degrees.

On Friday and Saturday morning, we expect temperatures from minus 10 to minus 14 C, with a daytime minimum of minus 20 and a daytime maximum of only minus 9 to minus 5 degrees. In the south and east of Bohemia, the Czech-Moravian Highlands, Moravia and Slzeko, another 5-15 cm of snow is expected. On Saturday, there may well be freezing fog, which will make the roads very icy.

The beginning of next week will also be chilly, though the freezing will slowly ease. On Monday morning, temperatures will be from minus 8 to minus 4, and during the day from minus 4 to 0 degrees C.