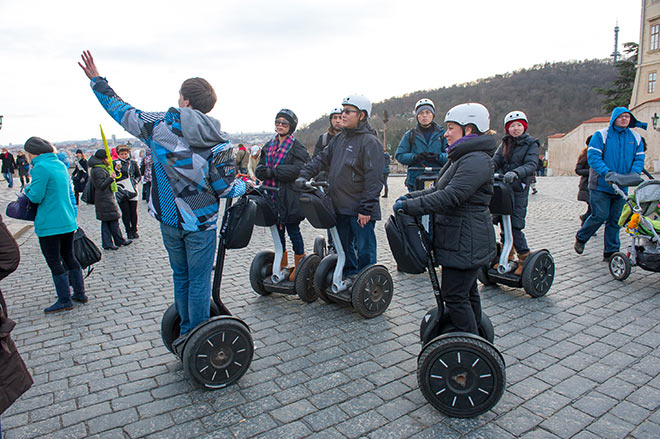 Prohibition of the very popular SEGWAY vehicles should be valid in the centre of the capital by mid-August 2016. Segways will not be allowed on sidewalks and roads in Prague 1, on Letná, in part of Vinohrady, Žižkov, Prague 4 and Smíchov. The prohibition will also apply in Libeň and Holešovice.

“We have even extended the prohibition to roads. If all those Segways moved from the pedestrian zones to the road and tourists would pay more attention to the sights than the traffic, we would be exposing not only them to dangers by doing so, but also all the drivers,” said the mayor of Prague.

The Segway Association of the Czech Republic, which brings together 25 companies, stood up against the limitations. According to them, about 300 people will lose their jobs because of it. The association is threatening the city with lawsuits. The installation of new brands, including consultation with the authorities concerned, should last 60 days according to the Department of Transport agenda. According to the mayor, it could be done even sooner.

According to the deputy mayor of Prague 1, Richard Bureš, it is possible to use the provisions of the Law on Road Traffic, which speaks of the danger of delay. “We will, however, leave the real assessment of the possibilities of the use of the relevant provisions of the Act to the experts,” said Bureš.

The Prohibition Was Made Possible By an Amendment to the Law

An amendment to the Road Transport Act allowed Prague to prohibit Segways, which defined what a Segway is. Until then, the law viewed two-wheeled electric vehicles as pedestrians. Residents and the Prague 1 City Hall have long complained about the vehicles, which are usually rented by tourists on their sightseeing tours.

Prague covers the whole of Prague 1 and part of Prague 2. The conservation area marginally also includes Prague 4, Prague 5, Prague 6, Prague 7 and Prague 8. However, the prohibition will not apply in Prague 6, at the request of the town hall.

It should be noted that the Segway tours are very popular among foreign visitors. Various tours around Prague are offered by dozens of companies. Individual tours have gained popularity, especially among younger generations, and they are among the top-rated activities in Prague. Traffic restrictions will have a big impact on other businesses because these tours will become less attractive due to the prohibition in the city centre. On the other hand, it must be said that the local people and even some tourists perceive this change as a positive one. The vehicles often threaten the safety of other pedestrians.

Share
Facebook
Twitter
Pinterest
Email
Print
Previous articlePrague Began Punishing Uber Drivers for their Price Lists, Threatening them with Fines of up to One Million
Next articleRunning a Taxi Business With Uber Remains Illegal In Prague. The Law Is Preparing Tougher Penalties
RELATED ARTICLES
News