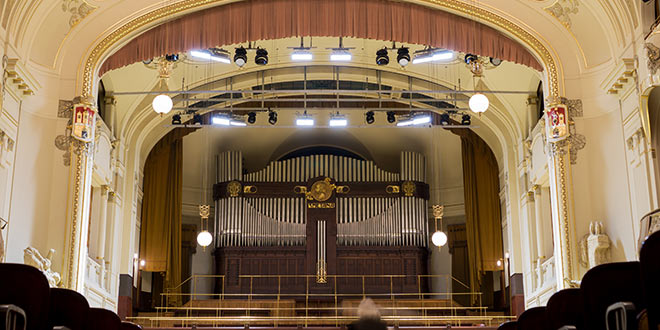 Sometimes you may be in the mood to listen to some music without involving the club scene too.  If this is the case, you are in luck as Prague has numerous areas for you to take in some live music at various concert halls and churches.

Klementinum in the Old Town

One of the most complex and largest buildings in Old Town, the Klementinum was founded in 1232.  Over the years, architecture has seen somewhat of an evolution thanks to the number of scientists, musicians, astronomers and philosophers who have inhabited the space and influenced its development.  Most of the concerts are held in the Mirror Chapel.  You will be among the greats in here as Mozart once played in this very same room.  In addition, tourists can take a tour of the building before a concert gets underway.

Otherwise known as Smetana Concert Hall, this is one of the best Art Nouveau buildings in Prague.  As well as housing one of the two largest concert halls in the city, there is also a French restaurant here so you can combine dinner and a show at the same time.  The building itself is a combination of stone word, gold trimmings and stained glass windows.  The Czech National Symphony Orchestra calls the Municipal House home, and you can see any number of fabulous classical concerts within its walls.

Located along one corner of Old Town Square, St. Nicholas Church is hard to miss and even harder to forget.  Bathed in light at night, the church also shines during the day as the sun strikes the white façade.  In addition, thanks to the acoustics, classical concerts are held here throughout the year.

Hybernia Theatre in the Old Town

Located on Republic Square, it sits across the street from the Municipal House and is hard to miss.  This building has recently been totally renovated and developed into the largest modern theatre the city has to offer.  Visitors are treated to wonderful acoustics and modern conveniences such as air conditioning while enjoying classical concerts.

Containing the Dvorak Concert Hall, the Rudolfinum plays host to some of the largest orchestras in Prague.  The concert hall is one of the two largest in the city and is home to the Czech Philharmonic Orchestra.

Spanish Synagogue in the Jewish Quarter

This Synagogue is known as being one of the most beautiful in all of Europe and is located in Jewish Quarter just next to Old Town.  The building itself is beautiful, both inside and out and is also part of the Jewish Museum and the home to numerous classical concerts.

Recently restored and part of the Prague Castle sprawling complex, this site offers classical concerts, often in the afternoon.  With an outdoor setting, it is a wonderful place to enjoy some beautiful music and nature at the same time.

Dating back to the 13th century, St. Jilji is an impressive church set among narrow streets and the much smaller buildings of Old Town.  Crafted out of Baroque and Gothic architecture, the church features high ceilings and numerous beautiful decorations.  Even the organ is a favourite of organists and dates to 1737.  Known for its acoustic quality, it is not to be missed.

This museum not only houses beautiful and historical pieces, but it also will be the site for classical music concerts on some evenings.  Set against the backdrop of a sweeping staircase, these concerts are special and very memorable.

St. Martin in the Wall Church in the Old Town

This beautifully preserved church is set in Old Town and located just a few short minutes from Old Town Square and Wenceslas Square.  Build between 1178 and 1187, the church contains excellent acoustics, making any classical concert an event worth attending.

This palace built between 1712 and 1720 is now a museum dedicated to one of the city’s greatest composers, Antonin Dvorak.  From May until October, the museum puts on numerous classical music concerts called Wonderful Dvorak.  They are performed under the beautiful frescos in the Music Salon.