DISCOVER PRAGUE!
HomeNewsPrague’s Shortage of Flats Is Getting Worse. Prices Will Still Be Rising...
News

Prague’s Shortage of Flats Is Getting Worse. Prices Will Still Be Rising in 2018 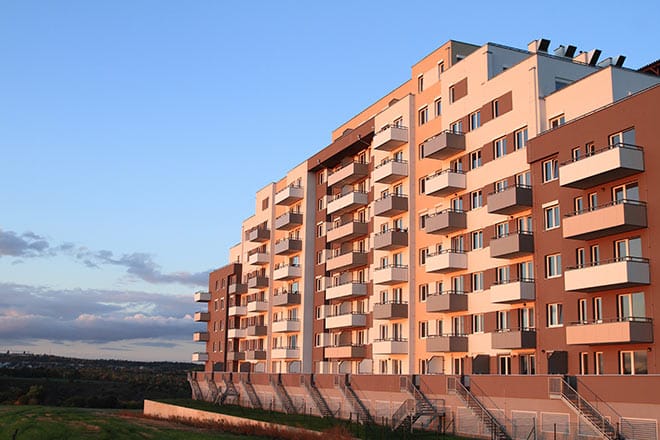 A typical Prague flat that is currently being offered for sale is located in a sparsely-populated area or a residential area on the outskirts of Prague and is located 17 minutes by car from the centre and 33 minutes by public transport from the centre. The closest greenery is located 0,5 km away. This stems from the latest analysis of the Institute of Planning and Development (IPR).

“Most new flats are currently being built in Prague 5 and Prague 9, states the director of strategies and politician of IPR, Tomáš Lapáček.

At the end of September, there were 118 projects with 13,206 flats being built, according to IPR. The average size of these flats was 82,7 square meters. The average price was about 7,000,000 CZK. The biggest projects were the Letňanské zahrady one, 522 flats, and Prosek Park, with 483 flats.

Flats Are Also Expensive Everywhere Else

The IPR’s analysis also concluded that the prices of flats are still rising. The average price for a flat in a development project has risen by more than 30% in the last two years. In 2015, a square meter cost 57,121 CZK, while now it costs 75,007 CZK.

This negatively influences the availability of flats in the city since the average wage isn’t rising as quickly as the prices of flats. Thus, finding one’s own flat is quite difficult. You now need 12 average yearly salaries to buy a new flat.

On an international scale, this puts Prague first in terms of the number of yearly salaries needed to buy a new flat. However, in 2008 this number was even higher, states Lapáček. For example, the people of Köln can buy a new flat after 5,9 years, the people of Vienna and Bratislava need 9,5 years, and the people of Berlin need 6,4 years.

According to the Deputy Mayor for Territorial Development, Petra Kolínská (Triple coalition/The Greens), most modern cities face similar problems with rising living costs. This also isn’t affecting only Prague, but in seven regions, the prices rise faster than in Prague, states Kolínská.

The largest decline in housing construction came after the crisis in 2009. New homes are being built at the same rate as before the crisis, but they simply can’t cope with the rising demand for flats.

Although, according to Kolánská, the prices of flats aren’t all that alarming, the city has to regulate it, for instance, by building flats for available rental housing. Prague is lagging behind other European cities regarding the number of flats it owns and thus can’t really influence the market that much. The flats at Černý Most, Dolní Počernice and Opatov are the closest ones to being finished.

Kolínská also states that Airbnb is negatively influencing the prices of flats since it uses more than 18,000 flats.

There is no way of regulating it, and the flats are missing from the residential market. The number of flats shared on similar platforms increased five times.

Aside from the state making VAT higher, Prague is making flats more expensive by not letting developers build new flats, aside from a few exceptions, states David Jirušek, a spokesman of Finep.

IPR also presses the fact that flats will be needed in the future. Its prognosis is that in 2050, there will be 300,000 more people living in Prague.

The developers are also stating that the processes leading to a new construction starting up to take up to 10 years and are thus unable to react to the market needs.

That is why even the middle class has problems with housing, and this is really troublesome for the residential market, adds Jirušek.

However, Kolínská disagrees with that statement. The notion that everyone who wants to afford normal housing has to take a mortgage is wrong at its core, and this thinking will lead to another crisis that will hit us like it hit many Spanish cities. Renting a flat brings in benefits that the developers rarely talk about.

Share
Facebook
Twitter
Pinterest
Email
Print
Previous articlePrague’s Astronomical Clock Will Vanish From the Old Town Square at the Beginning of 2018 for Half a Year, Because of Repairs
Next articleGoing to a Restaurant in Prague? Tourists Have No Idea That They Can Even Make a Complaint Directly in a Restaurant
RELATED ARTICLES
News