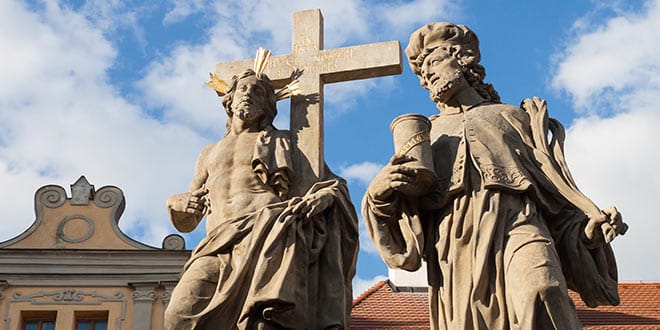 Generally, the Czech Republic is not a hugely religious country, even though it is adorned with huge numbers of historic churches and other religious artefacts and the fact that it is close to some heavily Catholic nations. By looking back through the history of the Czech Republic, we can see exactly why this is so.

The Slays that occupied the land of the Czech Republic in early times were, like most people during this time, a pagan group. This changed, though, when they were converted to Christianity in the 9th Century, thanks to the Přemysls, with help from the Byzantine Empire. Until the 15th Century, Catholicism was practised by nearly all of the population. By the 15th Century, though, there was a significant call for reform. The Protestant faith started to gather pace, which was further enhanced because Martin Luther established the first Protestant movement shortly after this emergence of a call for reform.

As well as Protestantism and Catholicism, Judaism is a religion that has a strong history within Prague, with the religion established in the city as early as the 10th Century. Most of the Jewish people lived in the area of the Josefov district until the end of the 19th Century when the district was effectively demolished to make way for new developments. Jews in the Czech Republic suffered terribly during the Second World War, and it is estimated that about 80,000 Jews from the Czech Republic died in concentration camps.

One of the biggest impacts on the religion of the Czech Republic came in more recent times, though, and this factor is obviously Communism. During the period of Communist rule, religion was effectively banned through the practice of intimidation and persecution by the authorities. This obviously drove people away from religion and most of the children born during this time grew up without any religious beliefs, therefore leading to the proliferation of atheism throughout the country today.

Of the Czechs that do follow a religion nowadays, most of them are Catholic. Still, the number of worshippers really is very low in comparison to other countries in the area. Interestingly, there is even a shortage of Czech priests, such as the lack of interest in religion from Czech people, meaning that priests have to be brought in from neighbouring countries! Most churches are never full, and it is generally only the elderly that now attend.

The general Czech attitude towards religion is one of complete atheism. It is not uncommon for a Czech person to state, in a matter of fact way, that there is no God and that when we die, we lie in a hole for eternity. Due to the fact that the country has suffered so much in the past from oppression and institutionalization, it is no wonder that the people of this country are sceptical when it comes to following any organization, be it political, social or religious.