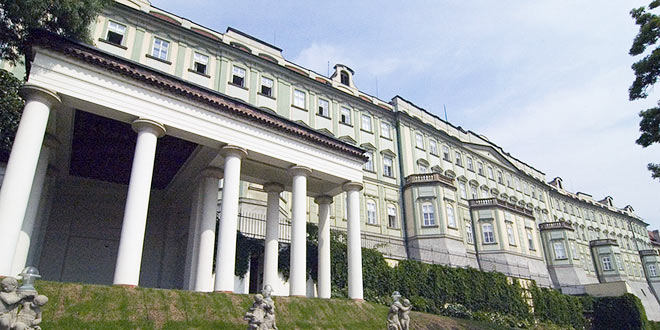 This large palace is located on Jirska Street in the area of Prague Castle. Originally a Renaissance palace of the noble family of Rosenberg, it was rebuilt in Baroque style and used as a residence for unmarried women from insolvent noble families.

Palace of the noble family of Rosenberg

There were several houses in the area already in the 13th century, but they all burned down in the big fire at the Prague Castle in 1541. The nobles of Rosenberg, owners of the area, decided to build a large residence there. The entrusted architect Hans Vlach projected a Renaissance palace with four wings, two of them with arcades. The Rosenbergs later bought another part of the area and founded a large garden there, lined with an arcade gallery built by Ulrico Avostalis in 1574. Emperor Rudolph II gained the palace through the exchange in 1600. He ordered a wooden corridor to connect the building with the Louis Tract of the Old Royal Palace.

The Rosenberg Palace was rebuilt so it could be used as a Residence for Noblewomen in 1756. It was projected by N. Pacassi and built by A. Lurago. Thirty poor noblewomen lived in the palace, all of whom had to be 24 years old or older. The only exception was for orphans, who could live there from the age of 18. The symbol of the Residence for Noblewomen was a picture of the Immaculate Conception of the Virgin Mary in a golden oval medal. An unmarried archduchess led the residence from the Habsburg-Lorraine dynasty. The first abbess was Archduchess Marie Anna, Empress Maria Theresa’s daughter. The noblewomen lived on the first and second floors, and in the other rooms, there was a capitular room, a sacrarium, a chapel and the abbess’s apartment.

Rosenberg Palace in the present time

The Residence for Noblewomen was abolished in 1919. The Ministry of the Interior took over the palace for several decades. Nowadays, there are offices of the Prague Castle administration and the Office of the President of the Czech Republic.

In Czech: Rožmberský Palác. Admission: Included in the ticket for Prague Castle routes. 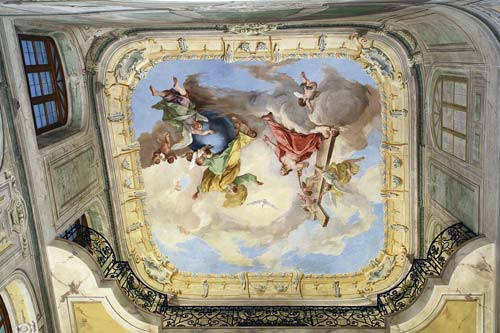