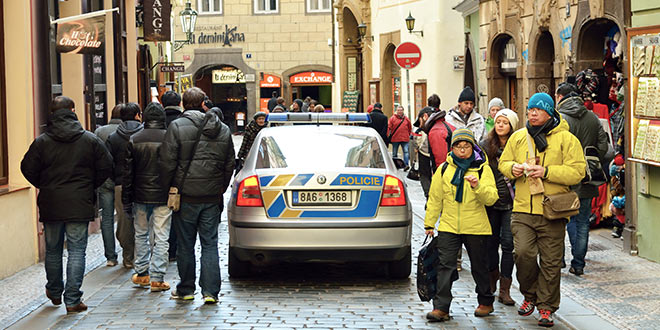 Prague is quite a safe city where violent crime is rare, though petty crime is quite a bit of a problem. So for visitors, pick-pocketing and car thefts are the worst dangers. To avoid an unpleasant experience, we advise you to watch your bag in tourist areas and on the metro and trams. Never leave valuables in your car. At night it is better to walk in well-lit streets and avoid the park in front of the main train station, though you should not encounter any problems. Tap water is safe to drink but is heavily chlorinated. In the Czech Republic, smoking is prohibited at schools, cinemas, theatres, sports facilities, state offices and other public places such as bus and tram stops. For example, if you smoke at a tram or bus stop, you can be fined (a 1,000-CZK fine). Another danger for visitors might be swindled, but you will be happy to know there is a way to protect yourself. Common problems are when a waiter puts an extra charge on your bill; a taxi driver adjusts his meter so you pay a little bit more than the official fare, an exchange office charges a rip-off 10% commission, or a hotel calls its contracted taxi and charges you a very high amount. In such situations, contact the Czech Retail Inspection Office. They may not help in your individual case, but they can send out inspectors and prevent it from happening to others. In all cases, keep the receipt or note and the details of the company involved when lodging a complaint. If you commit any offence and the police or transport inspector fines you, always ask for a receipt! Sometimes tourists can be targeted by prostitutes around Wenceslas Square, especially after dark.

Prostitution: Prostitution is not prohibited in the Czech Rep.  Although, officially, it doesn’t function as a legitimate industry.  Prostitutes don’t pay any tax, and the business is not state-regulated.  The risk to the customer’s health can be extremely high, particularly in the cheaper brothels or on the streets.  There have also been instances of prostitutes giving drinks spiked with sleeping pills to their punters and robbing them of everything.  Always make a note of the prostitute’s age because paying someone who is under eighteen for sexual services is illegal (in other cases, fifteen is the age of consent).

Drinking: Never leave drinks or food unattended or accept drinks from strangers, however attractive the offer might seem. There have been a small number of incidents involving drinks being spiked and visitors having their valuables stolen whilst intoxicated.

Marijuana: Marijuana is forbidden in the Czech Republic, although it is widely used – particularly amongst younger people.  Should the police notice you are smoking or in possession of marijuana, always be very courteous to them. In Czech law, having a ‘larger than small’ (i.e. greater than 15g) quantity of marijuana is grounds for prosecution.

Driving: Driving is very risky, and it is responsible for nearly one hundred and eighteen fatalities annually for every million citizens.  Badly maintained roads, the non-existence of any reliable infrastructure, erratic placemarks and a combination of both old model to late model cars is what causes driving to be a life-threatening activity.

These numbers can be called free of charge from mobiles even without a SIM card inserted.