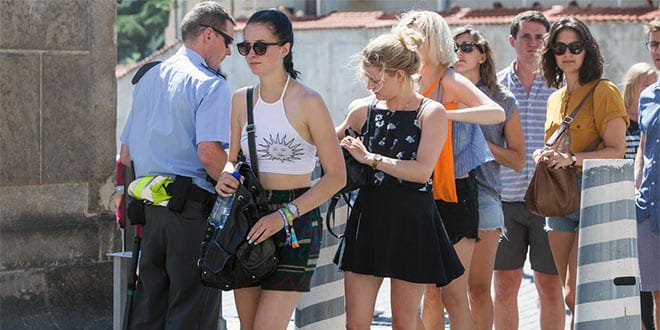 Travel agencies do not like the increased security measures at Prague Castle. Jan Papež, the Vice Chairman of the Association of Travel Agencies, called them ill-conceived and bullying tourists. Prague Castle rejects the criticism. According to the spokesman Jiří Ovčáček, security has priority over money. The tourists addressed understood checks.

On the contrary, tourists usually do not mind checks; they are used to them from abroad. When waiting in long queues, they are amused by guides telling them stories from the communist era. However, they are afraid that the planned safety frames will make queues even longer.

According to him, security measures should be respected in the current world. “But they are taken in a very unhappy way at Prague Castle. Someone has messed up an intention which may be praiseworthy, which is usual at Prague Castle,” said Papež. He pointed out that the Czech Republic has been ranked among the safest countries in the world for a long time.

Hynek Špinar has also criticized checks, the spokesman of Čedok. “Besides the inconvenience itself that we must queue, this extended the time a tour of Prague because the waiting time at the entrance to the area of Prague Castle is longer by at least one hour. On Saturday last week, for example, there was a queue from the Lví dvůr restaurant to Belveder,” he said. This means that a travel agency’s costs of a guide and a bus not calculated in the tour price are increased.

Prague City Tourism, an allowance organization of the capital city, refused the planned security measures in the press release in June. “We understand that the security of the seat of the President of the Czech Republic is a priority. Prague Castle is the most frequented sight in Prague, and if we restrict access to it for people or introduce strict security checks, they will perceive it negatively,” said Nora Dolanská, the Director.

“We Did Not Mind Waiting for a Few Minutes”, A Tourist Says

Their understanding concerning checks was also expressed by the tourists addressed on Tuesday afternoon, at the time when waiting in queues took several minutes. For example, Iwona, a Polish woman living in Germany, considers checks normal. She was surprised that there were no checks at Prague Castle in the past. But she expressed doubts as to whether the current checks can prevent terrorist attacks.

A young couple from France also called checks normal and security more important. A group of Slovak tourists also expressed the same opinion. “We did not mind waiting for a few minutes; it belongs to this situation. I was explaining to my children why checks were there,” said a man from Tábor.

Prague Castle introduced more intensive checks of tourists at the entrances to the most frequented Czech sight about two weeks ago. Soldiers and police officers check the backpacks of comers, for example. Prague Castle calls checks random and mainly focused on ensuring that larger weapons, for example, cannot be brought into the complex.

Due to the measure, queues occur, especially in Hradčany Square and at Powder Bridge now and then. For example, tourists queued a few minutes on Tuesday at around 15:00, but there were virtually no queues one hour later.

However, people have to queue for a few tens of minutes during a “tourist peak”, around noon, for example. According to Ovčáček, travel agencies have not adapted themselves to the situation and continue to bring tourists at the same time. It is expected that the situation will change within a few days or weeks at most.

Shelters Will Protect Tourists in the Rain

The spokesman of Prague Castle has also stated that shelters protecting tourists against bad weather will appear at the checkpoints soon. According to Ovčáček, measures will be gradually specified and modified.

All entrances to Prague Castle should be adapted to be protected against rain, for example. Also, the environment of inspectors will be improved to protect them against bad weather,” said Ovčáček. Concerning the form of the shelters, he told only that they would not look like the white booths in front of the Bundestag in Berlin. “We certainly do not plan this. We must pay attention to an important thing, which is the aesthetics of Prague Castle,” he added.

Soon, also checks in the safety frames at the entrance to St. Vitus Cathedral will be waiting for tourists. According to Ovčáček, the measure, which has already been planned by Prague Castle for several months, will allow smoother passage. “We would be very pleased if this took place at the beginning of autumn,” he said.

In the past, the media reported that Prague Castle wanted to introduce a camera system that could recognize faces. “We will certainly use the funds available to purchase very advanced technologies, which may also be inconspicuous and facilitate access to Prague Castle at the same time and allow, for example, to remove some elements which may look not aesthetically a bit,” added Ovčáček.

Share
Facebook
Twitter
Pinterest
Email
Print
Previous articleTaxi Drivers and an Officer From Prague Are Facing a Charge of Fraud and Corruption
Next articlePrague Will Buy Arts for Streets, Sculptures Will Be a Part of Public Constructions
RELATED ARTICLES
Prague Castle