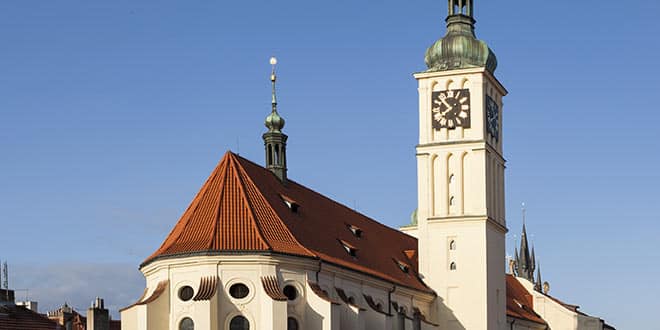 The St. James Church (also known as Church of St. Jacob) is easy to miss, but inside it is one of the most beautiful churches in Prague. Every nook and cranny is covered with decorations: red, green and black marble inlays, carved angels and paintings. The church was constructed in 1373. Order of Franciscans commissioned this baroque church in 1689 after its 13th-century predecessor had been destroyed in a fire. Church had its peak during the baroque period around 1739 as a Minorite monastery church.

There are about 20 altars decorated with works by Jan Jiri Heinsh, Franz Voget, Petr Brandl and Vaclav Vavrinec Reiner. On the main altar, visitors can see the wooden statue of the Virgin Mary, a priceless piece from the 15th century. As legend would have it, this statue was always considered to have miraculous powers, and people brought it all kinds of valuable gifts, even gold. The tomb of Count Vratislav of Mitrovice is the most beautiful Baroque tomb in Bohemia.

A mass is held every Sunday, and the choir and organ dating from 1702 are some of the best in the country, especially given the unique acoustics of the church. That’s part of the reason why the church gained a well-known musical tradition (regular concerts and recitals are performed here). Visitors will probably be disconcerted to notice a severed and now wrinkled hand hanging to the right above the entrance. Apparently, the hand belonged to a thief who tried to take the Jewels off the sacred Virgin Mary. The unfortunate fellow’s hand was grabbed by the Virgin Mary and consequently had to be severed. It now hangs on display as a grizzly warning for any like-minded ‘sticky fingers’. 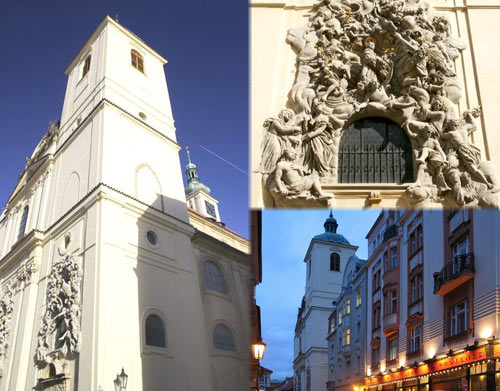