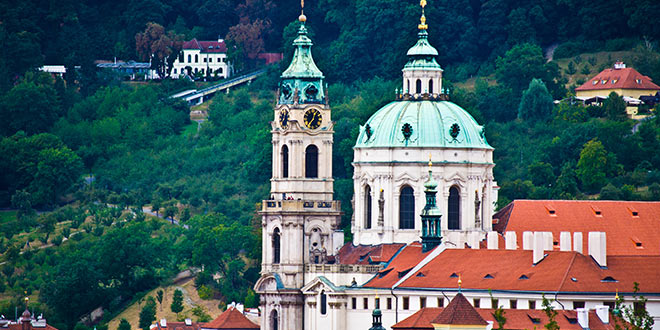 This baroque church built between 1704 and 1755 by Kilian Dientzenhofer is one of the most beautiful Baroque churches in Europe. The building was completed in 1735, but in 1781 Emperor Jozef II ordered the closure of monasteries and the decorations were removed. During WW2, the Czech army was stationed in this church and artists at the same time restored a lot of it. Originally a church of a Benedictine Monastery now belongs to the Czechoslovakian Hussite Church. There are beautiful ceiling paintings that show scenes from the life of St Nicholas and St Benedict and a wonderful chandelier. The southern facade is decorated with figures of Saints. Decorated with white stucco, it has been nicknamed the wedding cake and is a classic example of Prague Baroque architecture. Ignaz Platzer created the copper statue of St Nicholas, which looks down from the high altar. The splendid dome is 18m, in fact, higher than the Petrin Tower. Peter and Richard Prachner made the rococo pulpit with angels and cherubs in 1765. Inside is Baroque Organ of 1746, played by W. A. Mozart, when he was in Prague, four years later it was played at a funeral Mass in his memory. St. Nicholas Church is also a very popular concert venue during the summer.

You can take a horse-driven cab near this church and make a tour around the Lesser Town Square. 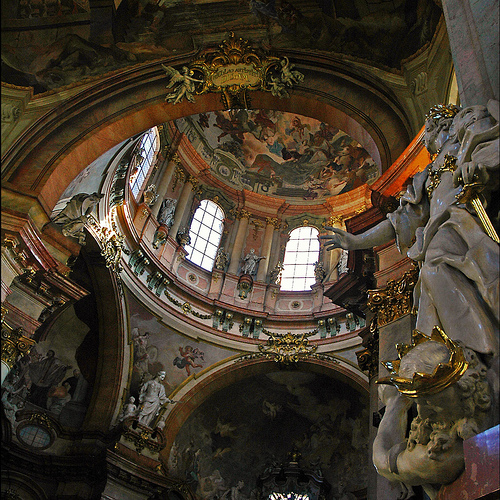 The belfry of the St. Nicolas’ Church is open to the public and offers a beautiful view of the Lesser Town.

The baroque tower adjacent to St. Nicholas Church was built by multiple architects, mainly Krystof and Kilián Ignác Dienzenhofers. Anselmo Lurago completed it according to the original plans in 1755. The tower’s height is the same as the adjacent cupola, and the gallery, which is open to the public, is 65m tall and has 299 steps. The tower belonged to the community, not the church, as indicated by the Mala Strana symbol over the entrance. This is the reason its street address is 556 since churches, for the most part, do not have numbered addresses. The tower has a separate entrance from the square. Since 1992 the tower has been administered by the Prague Information Service.

Getting there: by Metro A station Malostranská, Tram 12, 22 – stop Malostranské nám. 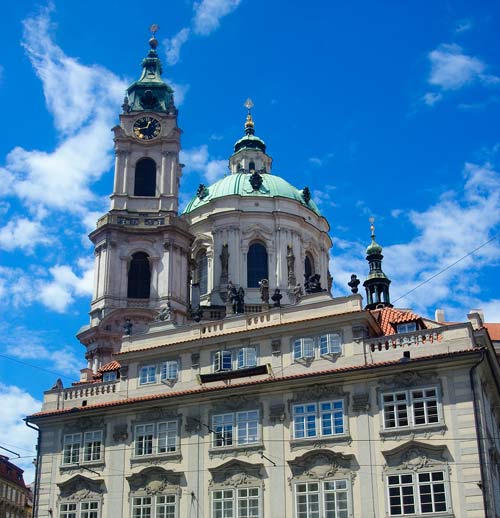