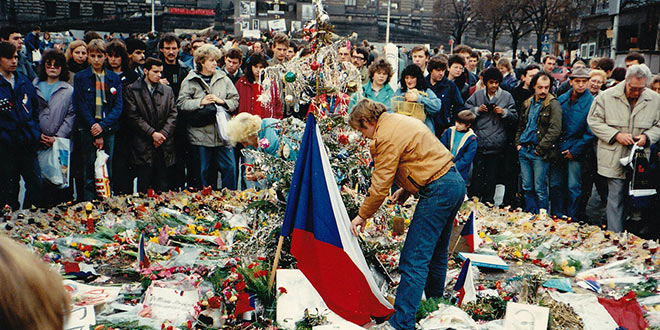 During the afternoon of the 17th November 1989, 30000 students assembled in the New Town of Prague to mark the fiftieth anniversary of the Nazi suppression of student demonstrations that had resulted in the shutting of Czech universities up until the conclusion of World War Two. The demonstration in 1989—which the Communist Youth originally intended to be a celebration of the victory of communism over fascism—unexpectedly transformed into a demonstration opposing the communist rule. The students yelled: “You are just like the Nazis!”. This protest was meant to finish in the Vyšehrad National Cemetery (located on a hill south of Prague’s New Town). However, after the planned event stopped in Vyšehrad, the protestors decided to make history and marched on Wenceslas Square.

While they negotiated their route northwards alongside the River Vltava, towards the main square of the New Town, the students made sure they kept their protest peaceful. The protestor’s realized that the slightest hint of violence would provoke a brutal retaliation from the police. In contrast, as the evening progressed, the police were conspicuous by their absence (during the 1980s, the police rarely missed an opportunity to attend any demonstration….particularly whenever they outnumbered the protestors). At around 8 pm, once the students walked down this very length of the street towards Wenceslas Square, 3 rows of police suddenly obstructed the protest in the corner of Spálená and Národní streets. Several minutes afterwards, military vans with bumper fences (which had crossed the bridge next to the National Theater) positioned themselves behind the demonstrating students. These law enforcement officials forced the protestors onto the length of Národní Třída, in-between Spálená and Voršilská. The police also blocked Mikulandská street (at the end), and law enforcement was waiting inside each house entry. This meant the protestors were cornered.

At 9:30 pm, the “Red Hats” (the specialized anti-riot commando unit renown for its’ brutality) showed up. The Red Hats positioned themselves on each side of the corridor. To escape, the trapped student protestors had to flee through this stretch while they were hit from the right and left sides. Police vans ushered captured protestors round the corner to police HQ (on Bartolomějská) to be interrogated.

Across Czechoslovakia, the following day, university students went on strike. Actors out of the theatres in Bratislava and Prague joined the student demonstration. A couple of days later, the parents of the students—appalled by the violence towards their children—gathered in Wenceslas Square. Triggered by what happened on the 17th November 1989, the spate of peaceful protests finished later on in the year on the 29th December, when Václav Havel was elected as president of a liberated Czechoslovakia.