The Church Of St Procopius 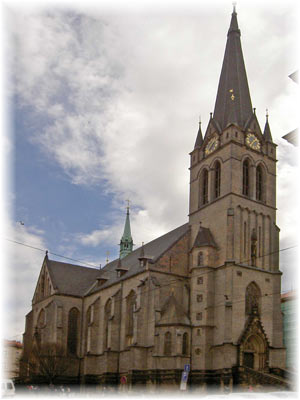 In 1898, Cardinal Franziskus Schönborn planted the foundational stone for this church to commemorate the fiftieth anniversary of Emperor Franz Josef the first’s reign. This church also was named the Jubilee Church. In the Gothic Revival style, the building of a church was begun in the same year, formulated on the architect Josef Mocker’s designs. Once Mocker had died, J. Uzel (a master builder) and J. Motejl (an architect) took over the building. Construction work was finished by F. Mikš. In 1899, the outer part of this church was completed, and the steeple at the front was put on during the year that followed. The building was put on hold because of shortages of funds, and this church was finished and declared sacred in 1903. In its interior, this Gothic-style Revival church has got a 3-aisle hallway with columns. The major portal’s tympanum is adorned with the relief, by Josef Pekárek, of the Child with the Madonna. The seventy-three metres steeple at the church’s front has a cross on top of it. This cross isn’t on an identical axis to the nave, but it’s manoeuvred to face onto the Sázava monas was founded by the Saint Procopius. In its’ interior, the object of greatest importance is the painting, by Karel Škréta, of Saint Wenceslaus, who Defended Prague. Produced in 1649, it initially was displayed in the Monastery of Emmaus. Episodes from St Procopius’ life are shown on the major altar. A historic crystal chandelier that weighs almost 1 tonne is hung in the church. This church contains the bones of the phalanx from St Procopius’ right hand and a bit of the cane of the abbot as holy artefacts. This church is part of the Roman Catholic Churches. Services are conducted in Slovak.

This is located in Sladkovského náměstí in Žižkov.