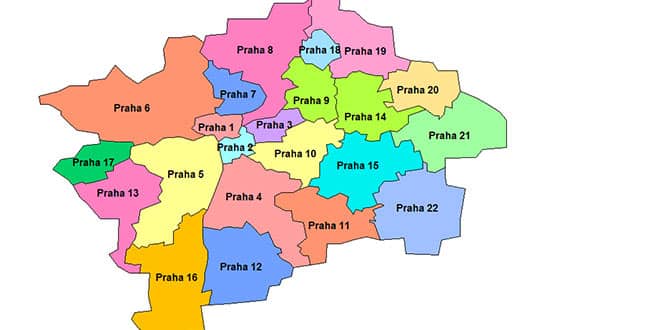 Prague is split up into 22 different districts (10 major), and each of these is divided, again, loosely into neighbourhoods. Below is a brief description of every district, with plus and minus points about each of them:

Prague One is a centrally located area that includes Malá Strana (the Old Town also called the ‘Little Quarter’ and the ‘Lesser Town’) and the castle area. The plus points about residing in Prague One are clear—it’s historical, picturesque and conveniently located, but there are various negative points. As Prague One is in a valley, the air pollution levels are the worst in the city. It isn’t easy to Park, and many streets can be boisterous, especially at night-time.

Prague Two encompasses the nearby neighbourhoods of Nově město (the ‘New Town’) and Vinohrady along the river. Due to its’ appealing location, quick access to nightlife, shopping and efficient transportation services, Prague Two is a neighbourhood in demand.

Prague Three is a distinctive mix of respectable neighbourhoods and working-class attitude, situated to the east just out of the centre. Prague Three shares a southern border with Vinohrady and, therefore, features much of Vinohrady’s residential and architectural plus points. However, it’s mainly comprised of the traditionally working-class district called Žižkov. Prague Three is also well-serviced by public transport, nightlife and shopping.

Prague Four is hard to summarize because it encompasses the southern part of Prague east of its’ river. Nearer areas like Nusle, bordering Prague Two, have nice apartments and views; more distant areas like Braník and Podolí have excellent villas at lower rents than villas in Prague Six—indeed, many people disregard Prague Four in their hurry to get to Prague Six, which is an error. Prague Four’s minus points mainly contain numerous panelák constructions, which are a big eye-sore. Prague recently re-classified these additional city stretches as Prague Eleven and Twelve, respectively. Convenient transport services are inaccessible, so lots of travel involves taking a bus to the tram or metro. The newly built D metro line, which is meant to be operational soon after 2010, ought to give a far superior service throughout Prague Four.

Prague Five includes south-west suburbia, over the river from Prague Four, and has all things from the dirty part of Smíchov by the river, to the splendid villas (with fine views) right up in the Barrandov hills, to the huge, grey Jihozapadní město paneláks (Jihozapadní město is now classed as Prague Thirteen). Prague Five has many great parks like Prokopské údolí and relatively clean air in the higher parts. Transport is fine, although you might have to take a tram or a bus to the underground.

Prague Six is widely seen as its’ city’s most prestigious area after Prague One. The Hanspaulka and Dejvice parts, particularly, are where lots of local politicians and foreign businesspeople stay. The district contains lots of elegant villas and embassies and is near to picturesque parks like Šárecké údolí and Hvězda as well as the airport. Families frequently decide to locate near Nebušice’s USA International School (there’s also a sub-development next to this school housing foreign families exclusively). However, the prices here are among the most expensive in Prague. Much of the public transport links to the city centre utilize a bus or tram to the underground.

Prague Seven features the residential/commercial Letná and Holešovice parts tucked away in the curve of the Vltava river and a plot of land named Troja slightly north of this river. The great parks Stromovka and Letná use up substantial acres of the district, and lots of Troja is utilized to house Prague’s Zoo. The river’s inward curve has a fantastic tram service and underground network.

Prague Eight takes up the north part of the town and, apart from the dilapidated Libeň neighbourhood (which got greatly affected by the floods of 2002 but has got an underground line going across it), much of this district feels decrepit and remote. The Kobylisy area has got a few nice houses up on its’ hill though, and the newly built C-line metro expansion draws it a bit nearer to the city centre.

Prague Nine vanishes off the map of the northeast and is too unattractive and/or remote for most people. If you work in this area, you can usually find a nice house for much less rent than any other place in the town.

Prague Ten is sandwiched between Prague Two and Three and spreads right out into the southeast. Central Prague Ten features some excellent residential neighbourhoods: parts of Strašnice and Vršovice, for instance, are a bit different from Vinohrady in their look but are similarly well-connected and well-made flats, detached houses and row homes are placed in other areas. Most of this district, though, is the same as Prague Nine—industrialized and remote.